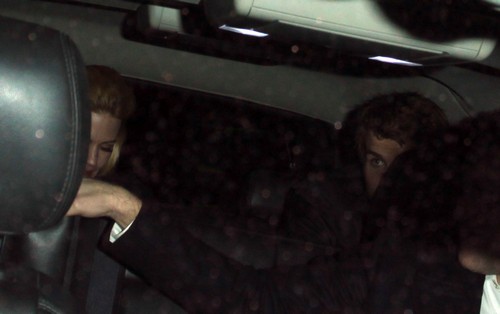 We reported in February that Liam Hemsworth was seen leaving Chateau Marmont with January Jones, and cheating rumors have been flying in every direction since. Although the two aren’t passionately making out—and actually look kind of pissed—many believe he’s two-timing Miley Cyrus, and that this marks the beginning of the end of their relationship. The two are rarely seen in public together, and insiders say there is trouble at home!

“Miley’s always felt Liam is so talented, so hunky that a woman could easily steal him,” a source told In Touch Magazine, print edition March 18, 2013. “That insecurity is always with her.” Of course, despite his fit bod, Liam should be loyal enough to push away any women who would try to distract him from his one and only, right?

The insider reports that January wants to go public, and was seen “clinging to him” at a party following their infamous dinner date. A producer explained that “when it comes to men, January just goes for it with laser precision. She uses all her feminine wiles.” What’s worse? “She doesn’t care if a man is with someone else or not.”

The insider claims that “Miley’s freaking out,” and got “super jealous and thinks January is after Liam. Miley’s been texting him nonstop about it. He says nothing happened.” But on March 6, Miley fought back and tweeted, “I am so sick of La. And sick of the lies that come with it. I didn’t call off my wedding. Taking a break from social media.” It actually fits in well—another insider says that “she trusts him” and won’t break off an engagement until something happens for sure. Of course, all we have are pictures of Liam and January looking sullen during a carpool, so it seems likely that the two are just trying to conserve gasoline! Do you think Liam would cheat, or is he totally smitten with his fiancé?