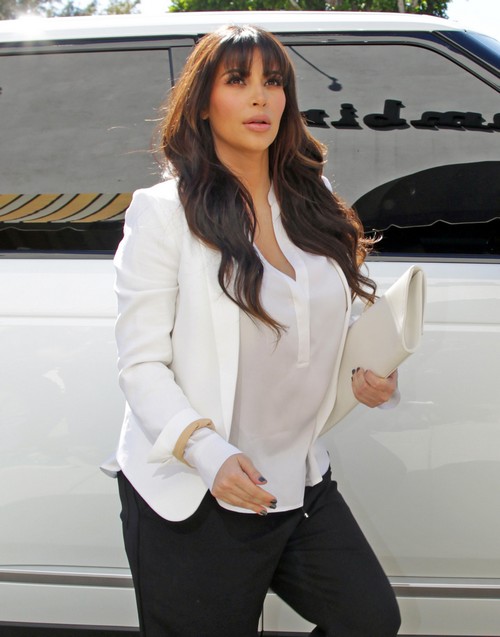 Kris Jenner is giving Kim Kardashian no time from shooting scenes for their reality show as she has made it clear to her daughter she should prepare herself for cameras following her every move just days once she’s given birth. The momager is aware that Kim is the money maker in  the family and seeing that they are shooting another series of their reality show over the summer, Kim is they key person to be filmed seeing that she’s given birth in June.

However, Kim isn’t too happy about this and neither is her beau Kanye West. The rapper has already told Kim that he doesn’t want her on the reality show, and definitely not with he baby, adding that it’s not okay for a newborn mother to be showing off her baby to the world. He wants her to have some privacy for herself, especially now that she’s having his baby, which she has agreed on but Kris won’t drop the subject.

Without Kim, the reality shows such as ‘Keeping Up…’ won’t draw in the ratings that it usually has, which is around 3 million viewers per episode. The 32-year old has told her mother that whatever weird plans she has up her sleeve to get her back to work just days after giving birth will not be happening. Kim has already agreed on popping in for several episodes of their show, but to go back as a regular once she is a mother is not going to happen.

Kris informed Kim that “Kourtney, already a mother of two, will pitch in with the heavy-lifting.”  “Kim was livid. She told Kris, ‘You want Kourtney to raise MY baby?’,” a close friend shared. “Kim couldn’t decide which was more insulting — her mother questioning her parental abilities or making it crystal clear that she’s simply an ATM for the whole family.”

For the first time, we gotta agree with Kim on this! Give your daughter a break and let her be a good mom to her child,- there’s no rush for her to be getting back on our television screens. In fact, the longer she’s away, the better. Ha.