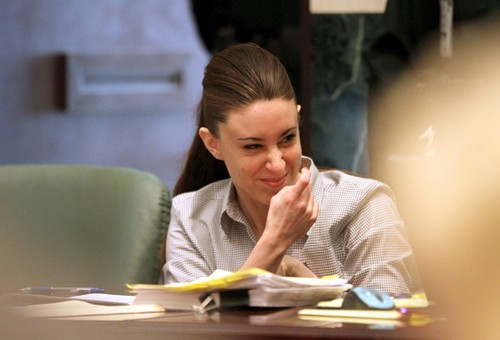 Casey Anthony is pregnant, but fears she’s in danger once the news reaches out to the public, The National Enquirer reports. Outraged protestors have already been informed about this and have demanded for Anthony to be sterilized  reasoning that she had murdered her first child, Caylee, and therefore shouldn’t be allowed to have kids ever again. There was valid evidence that Casey committed the crime, yet she still managed to wiggle her way out of jail time.

Protestors have every reason to be angry; why should a woman, who didn’t seem to have appreciated her daughter enough to kill her, have a child now? Is it fair? It’s sickening to hear that Anthony planned her pregnancy because she feels empty now that her daughter is no longer around, she feels that having a new child will allow her to try again at being a mother and help soothe the wounds that were caused by the death of Caylee.

“It’s outrageous that Casey Anthony should be allowed to bring another child into the world,” a protestor declared. “That poor baby should be taken away from Casey the moment she gives birth, and she should be sterilized so that she can’t have any more children.” While this person clearly made their point very vocal, there are further plans to start a petition to separate the baby from its mother upon birth because Casey isn’t capable of being a parent.

“I’m going to organize our group to start a petition demanding that Casey’s child be removed from her care, and that she be sterilized. We’ll present the petition to the local social services department when she gives birth.” As sad as it may sound to hear someone say they will try and fight a woman from keeping her child, Anthony killed her baby the first time around… what will make her see sense this time around?! We don’t know.