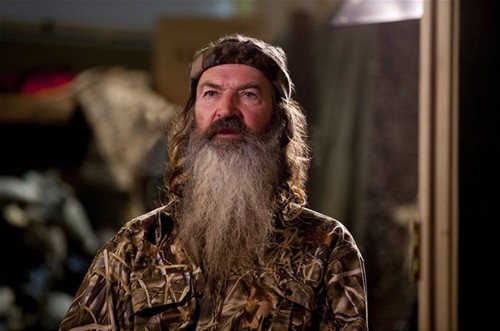 Duck Dynasty’s Phil Robertson is probably one of the strangest people on reality television. When you think of reality stars, Kim Kardashian is probably the first person that pops up in your head, not Mr. Dynasty, correct? With the ratings for his show rising, so is his love with his wife, Miss Kay, who he married when she was just sixteen years old… and he hasn’t looked back since.

Phil opened up about his relationship to his wife, having four children of his own and 16 gandchildren in total, before adding what attracts him to a woman – oh and if you can not cook properly, don’t expect to last on a date with Phil, because he’ll show you the door quicker than you think. Discussing his happiness, he said: “My idea of happiness is killin’ things, skinnin’ things, pluckin’ things and having a big meal with all of your children and grandchildren around.”

Robertson continued: “The first prerequisite is to check a girl’s cooking” said Phil. “If she’ll pluck the duck you just killed, that’s good, but if her cooking don’t stack up – ADIOS! You can’t live off of love alone or you’ll starve. Then make sure she carries her Bible and lives by it every day. And she don’t have to be pretty, neither. Besides, it’s hard to find pretty girls who carry the Bible around these days.”

Okay, so if you’re a woman, like seeing animals being killed, skinned and eaten, don’t have a problem cooking them and feeding them to your children and to your husband, then you’re in the safe zone so far. Oh, and not to forget, you have to be quite religious to have a chance with someone like Phil. Ha.

“Get someone who is meek, gentle, kind-spirited …a country girl that loves to eat bullfrogs – now there’s a woman. Don’t get no yuppie girl,” the 66-year old added. Okay, enough of that romance talk. Let’s focus on the amazing ratings his show, Duck Dynasty, has had in the last few weeks. Its premiere date for the third season saw 8.6 million viewers tune in… that’s DOUBLE of what the show got on the premiere of the second season!

As gross as he may be, he knows how to keep viewers entertained.