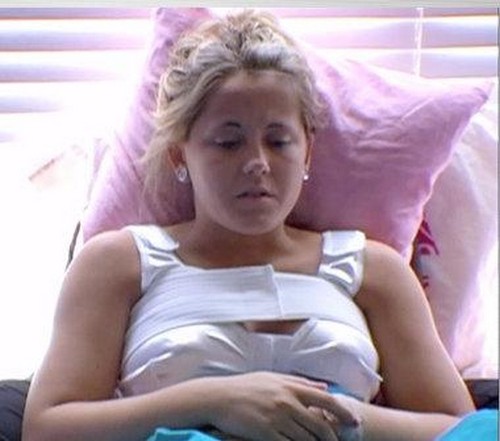 Jenelle Evans introduced the world to her new boobs on the lastest episode of Teen Mom earlier this week. The reality star who underwent surgery last year to get herself some bigger breasts seemed nervous throughout the procedure as her mom and ex-boyfriend Kieffer Delp stood by her and offered their help whenever she needed it.

Though we’re shocked to hear that her mom actually allowed her daughter to have a boob job, seeing that she came across as a quite tolerant mother, she didn’t go against Jenelle’s ways this time; probably because she’s learnt to back off — she isn’t underage anymore. Anyway, after the Teen Mom starlet had the procedure done and everything went successful, Jenelle was in quite a lot of pain which is why the nurse gave the family some medications which they should pass on to Evans to take.

The medications were there to stop the pain that Jenelle was feeling, but Kieffer had other plans in mind — though he didn’t say it. He had previously been convicted of felony and drug charges, and Jenelle’s mom, neither the nurse were going to let any kind of painkillers get into the hands of Kieffer, knowing that he would most likely end up taking them himself.

While Kieffer was trying to figure out how he could possibly get his hands on some prescription drugs, Jenelle was busy texting Gary Head, her ex-boyfriend who stopped by the hospital once Kieffer had left the building. Clearly, nobody wanted any trouble, but how weird is it to have your ex-boyfriend come and congratulate you on your new boobs after your current boyfriend (at the time) just left?