Khloe Kardashian Caught With Her Legs Wrapped Around Rapper The Game 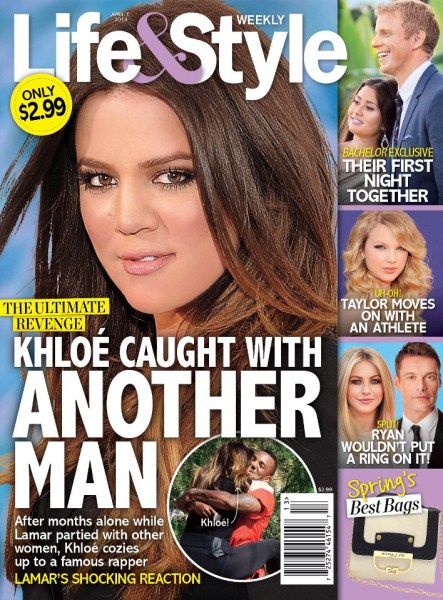 The current cover of Life & Style magazine has the bombshell story, “Khloe Caught With Another Man.”  Yep, just when everyone was accusing Khloe Kardashian‘s hubby Lamar Odom of cheating, it seems Khloe has been being a bad girl too.

Khloe got fed up with Lamar heading to Vegas and partying with showgirls so she decided to get the ultimate revenge.  Rapper The Game has become a fitness motivator for her and her brother Rob Kardashian.  So he is around the Kardashian compound a lot and on Khloe’s radar.

After months of being alone while Lamar partied Khloe decided to get cozy with The Game.  L & S managed to get their hands on the shocking photo of Khloe with her legs wrapped around The Game (a.k.a. Terrell Taylor’s) waist.  The magazine has Lamar’s shocking reaction.

Lamar is getting increasingly uncomfortable with how much time Khloe’s spending with the rapper especially since she let it slip one day that he said she had a nice ass.   “Lamar thinks Khloe and The Game are more than friends. She will go hours without answering Lamar’s calls, which has never happened before.“

To find our more about Khloe, what she has been doing with The Game and Lamar’s shocking reaction, pick up the current issue of Life & Style Magazine.