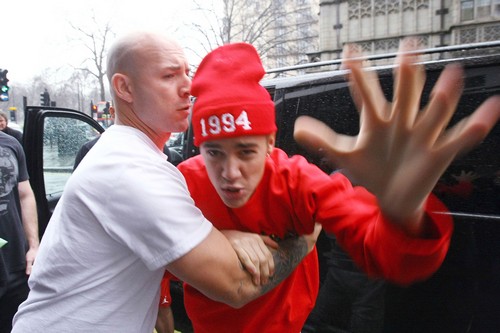 Justin Bieber‘s Neighbor Says He Threatened His Life & Spit in His Face!

The plot thickens!  Yesterday we posted that the police were called to Justin Bieber’s house because he allegedly battered his neighbor.  Justin’s team said that the neighbor was unhappy about parties that went on when Justin was touring.  They went on to claim that Justin did nothing.

After police interviewed other neighbors in the area and the neighbor, there seems to be more to the story.  Apparently Justin got a new Ferrari delivered to him and in the early morning he decided to drag race down the street.   At the time of his drag racing their were mothers and children on the street.

Justin’s neighbor was understandably upset, he felt Justin was putting the residents of the neighborhood in danger and he decided to tell Justin as much.  Justin did not take kindly to being told what to do.

According to TMZ, The man — a 47-year-old successful businessman and father of 3 — went onto Justin’s Calabasas property and screamed, “You can’t drive like this!”  The man told deputies, Justin responded by saying , “Get the f**k out of here,” and then he spit in the guy’s face and said, “I’m gonna f**king kill you.”

At this point the neighbor is refusing to back down and wants Justin prosecuted to the fullest extend of the law.