Kim Kardashian’s Pregnancy Is FAKE, It’s All About Money: REPORT 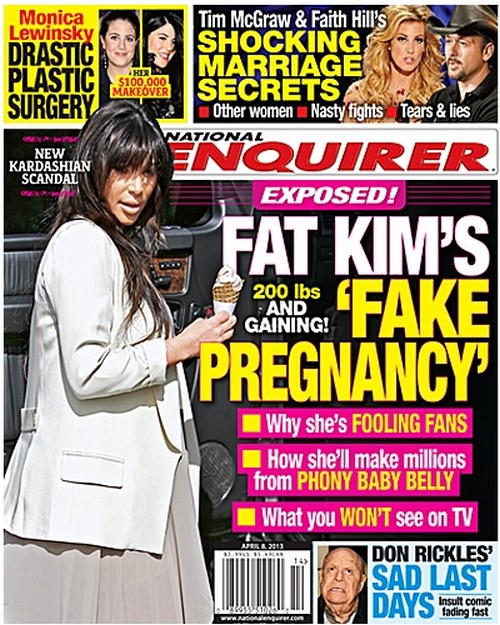 The current issue of National Enquirer features the cover story, “Fat Kim’s Fake Pregnancy.”  The magazine claims there is a new Kardashian scandal brewing and they have the scoop.  The lucky Kardashian in their cross-hairs this week is Kim Kardashian.  They claim Kim’s pregnancy is a FAKE.   NE says Kim is, “faking her pregnancy in a shocking ploy to net a multimillion-dollar payday and to repair her battered image.”

It seems that Kim who is pregnant with her first child with Kanye West is fooling her fans and the pregnancy is a sham.  They go on to accuse Kim of wearing a phoney baby belly.  They say her weight gain is not baby weight, it is just Kim letting herself go and getting fat.  They go on to say that Kim has ballooned to a whopping 200lbs and climbing.  “Kim’s baby bump seems to change size and position — and sometimes even disappear — as the 32-year-old beauty travels around the country and the globe,” says the magazine.

Not one to stop there Kim is suppose to also be faking her pregnancy to score endorsement deals.   According to NE’s source Kim, “could earn a whopping $16 million from the baby product endorsements, a birth special for the E! network and even a post-birth weight-loss deal.”

Apparently, this is all a plot cooked up by Kim and her mother Kris Jenner.   Kim and Kris hired a surrogate have Kim’s and Kanye’s baby. huh?

This is one of the most ridiculous stories I have ever heard.  Their cover totally contradicts itself. First she is not pregnant, then she has  gained 200 lbs, then she is wearing a fake belly.  Come on National Enquirer, if you are going to make it up, make the story make sense.

What do you think Hiccupers?  Is Kim’s pregnancy fake or is this just groundless speculation by National Enquirer to sell magazines?  Hit the comments and let us know what you thought!