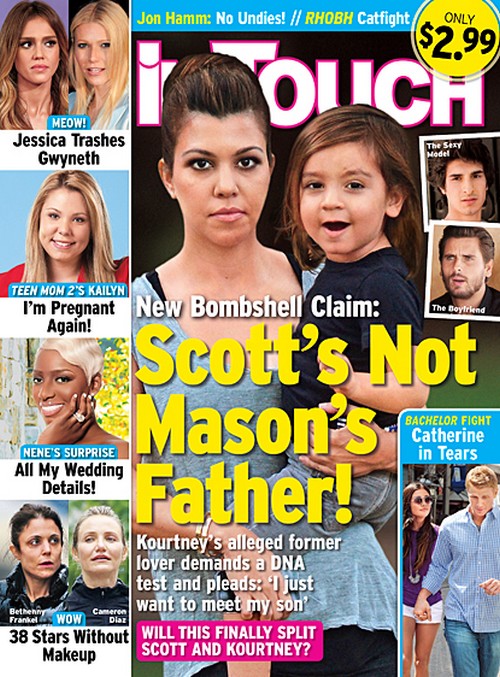 The current issue In Touch features the cover story, “Scott’s Not Mason’s father.”  In a bombshell report the magazine is reporting this week that Kourtney Kardashian’s three-year-old son Mason Disick‘s father is not Scott Disick.  They believe that Mason’s father is actually LA-based model Michael Girgenti.

Michael worked with Kourtney on a photoshoot in 2008 and Michael believes he is the father.  “We started kissing, making out and touching each other. We were fooling around on the couch for a little while before I took her to the bedroom,” Michael tells In Touch of his alleged March 2009 fling with Kourtney, when she told him she was on a break from her boyfriend, Scott Disick. Then, he says, they headed to his room: “I slipped her clothes off. She helped me undress, and we fell into bed.”

Michael claims that Mason was born 9-months later and he has to be the father.  But Kourtney says his claims are not true.  She admits she worked with him, but says all his claims are fairy-tales made up by him and his claims are, “preposterous and an outrageous lie.”

I am not sure I believe Michael, Mason really does look more like Scott than Michael and it is odd he would wait three years before coming forward.  What do you think, is Michael just making a grab for some Kardashian $$$$?  Hit the comments and let us know your thoughts!

For more information on Kourtney’s paternity bombshell, pick up the current issue of the magazine on newsstands now!