The Bachelor Sean Lowe and Fiancée Catherine Giudici Are OVER! 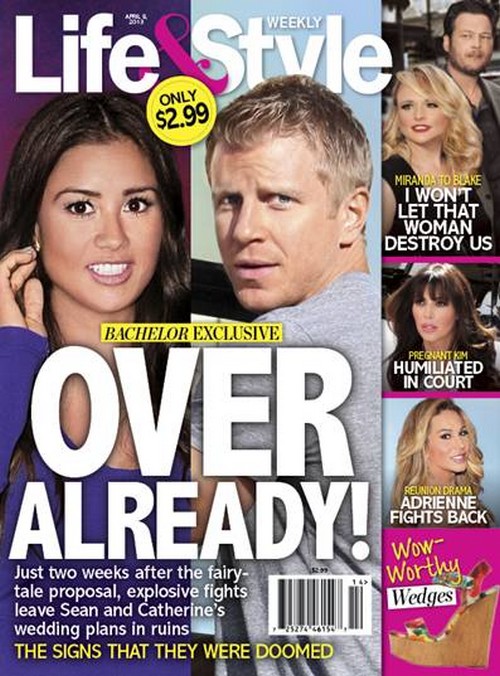 The Bachelor Sean Lowe and Fiancée Catherine Giudici Are OVER!

Well that didn’t take long!  The current issue of Life & Style Magazine features the cover story, “Bachelor Exclusive – It’s Over Already!”  The magazine claims that just one week after the Bachelor finale, where Sean Lowe professed his love for Catherine Giudici, there is already trouble in paradise and the relationship is doomed.

Life & Style reports that the two are fighting like cats and dogs and they have the scoop on what went down when they hit The Sayers Club in LA.

“About an hour after they arrived, Sean and Catherine were in a corner, and she was clearly mad at him, yelling at him,” an eyewitness dishes to the new issue of Life & Style. “Sean was trying to talk to her, but she didn’t want to hear it. She was fed up with him and rolled her eyes. Then she started crying, wiping her eyes and looking away from him.”  The partygoer said that the argument lasted for 30 minutes, adding, “She was shaking her head and hands at him.”

The two were also caught fighting on the way to Catherine’s apartment.  “They were having a disagreement about something. I heard Catherine say, ‘That is annoying, Sean. Why do you say that?’ Sean was trying to calm her down.”

To add to this people are reporting that there is a clear “chill” between the two.   Could the reason behind all this fighting be Catherine’s insane jealousy?  Catherine is reportedly not pleased that Sean is dancing with Peta Murgatroyd on this seasons DWTS.

For more info on Catherine and Sean’s relationship and their explosive fights, pick up the current issue of Life & Style magazine.