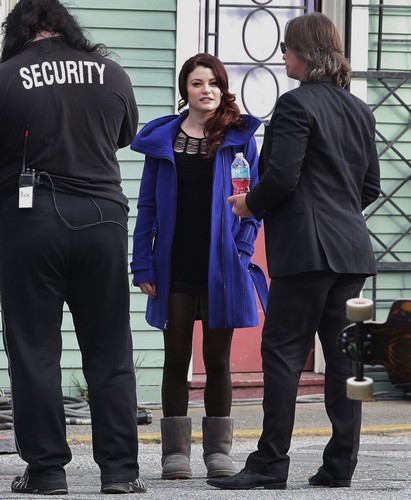 Actors Robert Carlyle  and Emilie de Ravin film a scene for “Once Upon A Time” outside Mr Gold’s pawn shop on March 27, 2013 in Vancouver, Canada.  Robert plays my favorite character Rumpelstiltskin and Emile plays Belle on the hit docu-fantasy series.

The show is taking a couple of weeks hiatus and will return April 14th, 2013 with a retrospective.  ABC invites new and avid “Once Upon a Time” viewers to take a look at one of the most talked about and critically acclaimed shows. “Once Upon a Time: The Price of Magic” will explore the series in a way that will bring new viewers up to date — but which current viewers will also find illuminating – in discovering the consequences the residents of Storybrooke have had to endure since magic was introduced into the town, and whether Mary Margaret’s path has been tainted since learning that her heart has been darkened after she killed Regina’s mother, Cora.

Series creators and executive producers Eddy Kitsis and Adam Horowitz will provide some inside scoop on the importance of family, the characters’ journeys and the mythology of the show. They will also tease what’s upcoming in the exciting final four episodes of the season.

Nothing is more important than family, and this season has shown just how close these bonds are, even between good and evil. Magic always comes with a price: the residents have come to discover just how true these words are ever since Mr. Gold introduced magic into Storybrooke when the curse was broken. Mary Margaret and Emma – mother and daughter reunited – were sucked into a portal that transported them to what was left of fairytale land. It was there that they met Mulan and Aurora, who helped them defeat Cora and Hook and enabled them to travel back to Storybrooke, reuniting them with Emma’s father David and son Henry. But Cora and Hook also found a portal into town, and Cora set her sights on reuniting with daughter Regina.

She also tried to find Rumplestiltskin’s dagger in order to take him down and become The Dark One. Hook set his sights on killing Rumple, not for power but for revenge for killing his true love (and Rumple’s former wife), Milah. Mr. Gold also set out to find his son Bae, which he did with the aid of Emma and Henry in New York. But much to everyone’s shock, Bae turned out to be Emma’s former love, Neal, who is also Henry’s father. Upon returning to Storybrooke to find a cure for Mr. Gold, who was poisoned by Hook, Mary Margaret did something completely against her nature – she used dark magic to kill Cora – causing her heart to darken. And what plan does Greg Mendell, who has been recuperating in town since his car accident, have in store for the magical inhabitants of Storybrooke? Greg saw magic as a boy in the town and believes Regina may have killed his father. His price of magic may just be revenge.