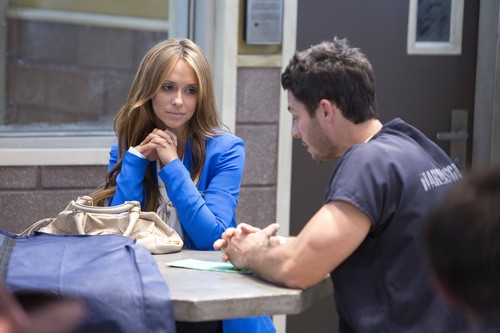 Lifetime’s hit show The Client List starring Jennifer Love Hewitt come back Sunday with a new episode called, “My Main Trial Is Yet to Come.”

On the new episode Selena doesn’t trust Riley’s new hire, Nikki, and Riley tries to keep the peace and some stability in the wake of all the new changes. We get a glimpse into Nikki’s life before The Rub of Sugar Land when Riley meets her ex-boss, Greg Carlye, who runs a strip club. Meanwhile Riley discovers that Derek has been keeping a secret of his own that jeopardizes The Rub of Sugar Land.

Riley wisely decides that Derek’s secret can be used as a valuable business opportunity. Riley must decide whether she wants Katie and Travis visiting Kyle in jail. Riley and Evan struggle to find time with each other. Riley receives an unusual request from one of her clients, a pro football player who likes to test his boundaries. Guest stars: Sunny Mabrey, Trevor Donovan, Marco James and T.V. Carpio.