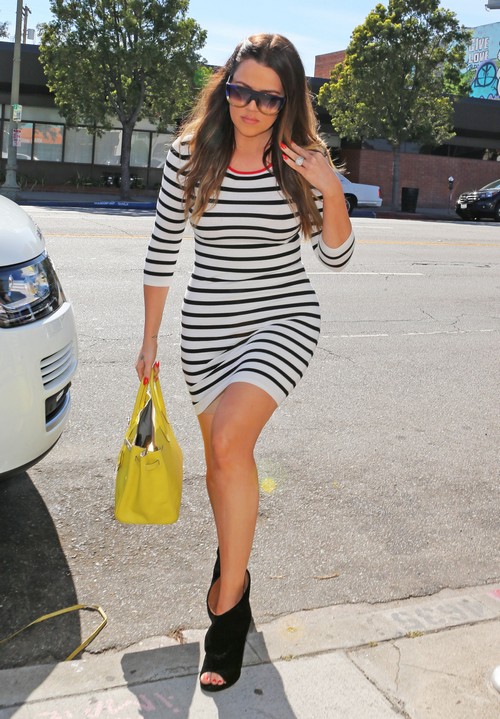 Khloe Kardashian has very much lost the plot in the recent Keek video she uploaded on the site, not only mocking her mother, Kris Jenner, as she filmed her segment for the QVC show, but also calling her mom a “bitch” behind the scenes. The 28-year old reality star pretty much always has a big mouth towards her mom, but when you are mocking your mom in that particular way, it isn’t funny.

So, Khloe and Kris were on the set of QVC, promoting another one of their bunch of cheaply-made products. As Kris closely listened while she was directed by her team on what she needed to do on-screen, her obese daughter made fun of Jenner’s actions as she “fake smiled”, looked at her breasts, before making the stupid comment of using the ‘B’ word toward her mother.

Are we overreacting or is 2013 the year where children get to start disrespecting their parents? Let’s face it, whether you like them or not, this family have power over YOUR kids… they are easily influenced by what the Kardashians wear, do or even say, so if your child tells you to bring the dinner to their bedroom… before adding the word ‘bitch’ at the end… that’s when you know you have a problem on your end.

In the video, Khloe explains: “Work it Kris… Pose it, pose … Look she’s still posing even when she’s not on camera… Look at the fake smile… Ah, big smile… Oh, there ya go… Work it girl… Work it… Pose… Yep, they’re staring at you… Put the head down… Yeah, Look at your t*ts. Look at your t*ts. They look good… They look good… Ah, with that fake smile… Sell that QVC product b*tch… OK… Ooo!”

What do you make of the comments that Khloe made?!