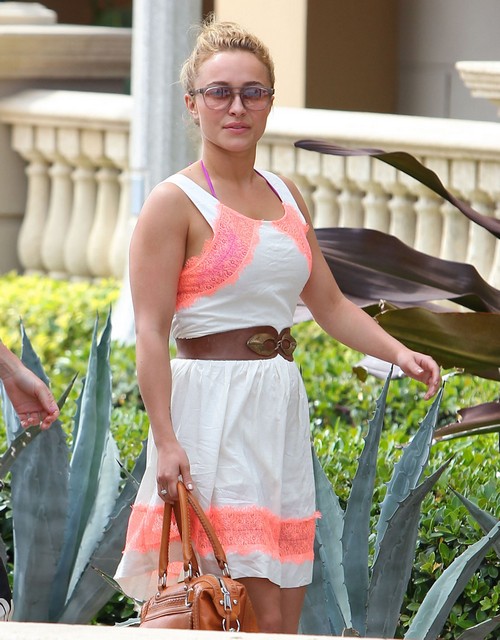 Hayden Panettiere pregnant? Say it isn’t so! According to new reports, the actress could be expecting a baby with her rumored fiance, Wladimir Klitschko, who she has been dating on and off for over a year. Hayden caused quite controversy in the newest issue of Glamour where she made comments about how much she feels “she was born to be a mother”, which has had everyone thinking she was hinting about being pregnant.

The May’s issue of the magazine, which goes on sale next week, has Hayden gushing all about how much she desires to be a parent and have a child of her own. She expresses her feelings on how much she would cherish her own child once she became a mother, explaining: “I don’t really have a plan. I’ve lived a very big life, and I don’t feel my age, and I feel like I was born to be a mother.”

Hayden then continued: “Motherhood is the most beautiful, exciting thing, and there’s nothing that I feel like I can’t accomplish while having children in my life. I would sacrifice having more years of being wherever I want whenever I want for years with my kids.” Wowza, Hayden – what’s bringing all this motherhood  talk on?  Hmm, it’s sounding pretty obvious she’s expecting, don’t you think? or maybe not….

We’re a little skeptical about the possible she is having a child with Wladminir, because they have split twice in the past.  If she gives him the news that she’s expecting a baby, it may just make him run a a mile in the other direction… or he will look at this as a blessing and marry Hayden sooner.  What do you think Hiccupers?  Was Hayden hinting at being pregnant or her future pregnancy plans?  Is this the reason the couple got back together?  Hit the comments and let us know what you think!

Either way, if she is pregnant, congratulation to her!

Hayden Panettiere Has Affair With Nashville Co-Star Jay Hernandez, Breaks Up His…