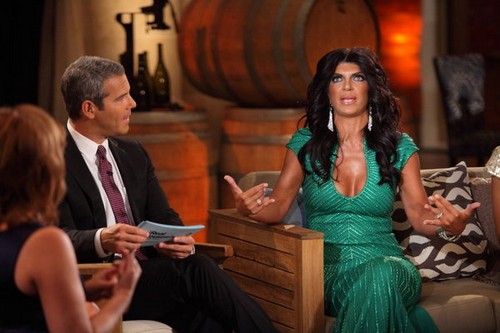 No one on the Real Housewives of New Jersey had us fooled that their so-called ‘good behavior’ would be kept up for longer than a couple of episodes, because their nice attitude finally came cracking down when Teresa Giudice broke the ice… kinda. Okay, so here’s what happened. Over the weekend, tension started rising when the reality star and Melissa Gorga showed up for Kim D’s new Posche store on Saturday evening.

Though Giudice didn’t directly start any drama, Melissa’s husband, Joe Gorga, had spoken with a couple of people after confronting them to find out why they were bad-mouthing his wife by spreading false rumors about her all over the place. The finger was quickly pointed to Teresa who has supposedly been telling a bunch of stories about Gorga and her family… because we all know how much Teresa can be a bitch sometimes, don’t we? Haha.

One of the men who was confronted – Jonathan Karagiorgisa – didn’t shy down from the heated argument as he simply admitted to have said some nasty things about his wife in the past, and no one likes to hear someone tell other people nasty things about you that are not true, so the only way Joe could react was by throwing a couple of punches from left and right.

“Joe Gorga approached a guy named Jonathan Karagiorgisa and confronted him about all the things he’s said about Melissa on Twitter, and Jonathan admitted he was writing about her,” a spy explained, before adding how cameras were there to capture every single punch that was thrown. “Jonathan was not backing down, and that’s when they all started to exchange blows!” the spy said.

“Jacqueline kicked off her shoes and bitch smacked Jonathan on the back of his head! This is where the Manzo boys along and Lauren Manzo jumped in out of nowhere to break up the fight! Bowls were broken, glass everywhere,” the eyewitness said, adding that Teresa was simply watching the fight go down from a view quite far away — she was rather enjoying it.

So, how does Teresa fit in all of this? Well, the argument pretty much went down all because of her in the first place. So wait!! Did she mentally abuse these people to start a fight upon themselves? Oooh – she’s really good at being mean, isn’t she? LOL. The spy added: “Even though Teresa was blamed for the fight, and Jonathan said she was the one telling him all of the gossip about Melissa, she and Joe didn’t do a thing, they just watched it all unfold and didn’t even step in to try and stop the fight!”