Carrie Underwood Dishes How She Keeps Her Marriage HOT! 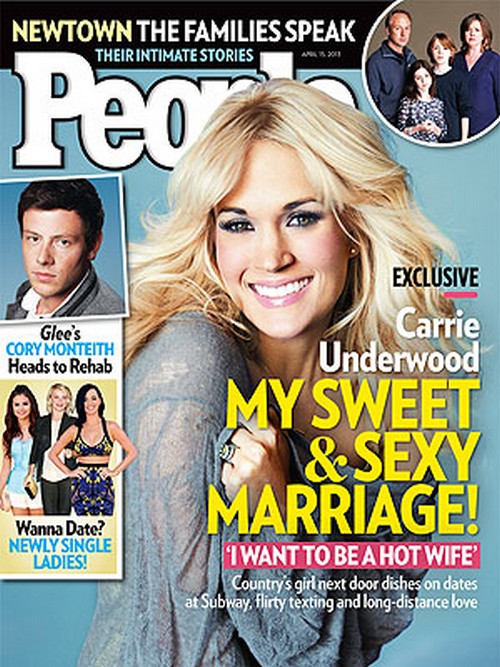 The usually very private Carrie Underwood is opening up on how she keeps her marriage hot, spicy and fresh! The former American Idol starlet has told People magazine that she wants to remain a hot wife to her NFL husband, Mike Fisher – since he remains in good shape himself, she has to do her part to satisfy him too.

Underwood has been on tour for the past eight months, which has kept her away from seeing her husband, but she says that whenever they do see each other, Carrie tries to be as romantic as possible with the little time they have for each other, adding that she’s constantly trying to think of ways to keep her marriage fresh.

Nobody likes to do anything in a routine, especially when it comes to marriage. So we can definitely see why Carrie wants to try out new things in her relationship. But that’s not all. Underwood also tells the mag that being married to an NFL player has helped her keep in shape herself; Mike motivates her to stay healthy and work out regularly.

“Even when he’s like, ‘I’m so out of shape,’ he still has a six-pack,” she tells PEOPLE. “Having Mike there – I want to be a hot wife!,” before dropping the bombshell that if it ever came down to having to choose between her marriage and her music career, she wouldn’t even need to consider it, her husband would be her first choice.

“If Mike ever told me he needed me to quit, I’d quit,” she says. “When you make that promise to somebody, and you stand before God and your family and friends, you’ve got to do everything that you possibly can to make that work.” Ah, a woman who actually sincerely loves her husband as opposed to using him to cash in on a publicized wedding is very rare these days. Yes, Kim Kardashian – we’re referring to you!