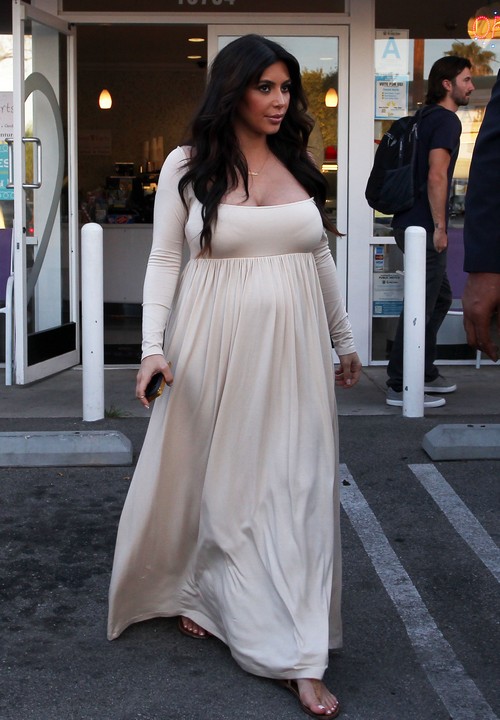 Kim Kardashian is seriously starting to put on the weight, and shows no signs of slowing down.  New reports claim she’s hooked on high-calorie, carbohydrate heavy meals that are between 1,000 to 1,300 calories per meal. Last month, we reported how Kim had packed on a staggering 65lbs in a matter of months, and let’s take into consideration that she still has three months to go until she gives birth.

She’s definitely overeating by the looks of things and In Touch Weekly has the scoop; Kim was spotted last month in Atlanta as she promoted her new movie, Temptations. In her spare time, the 32-year old had made her way to several restaurants, downing greasy chicken, waffles, potatoes, collard greens and mac and cheese. Note, that she reportedly ate all of it for just one of her meals that day.

As she returned back from her brief trip, Kim made another couple of visits to her favorite restaurant in town… Il Pastaio, where she was seen indulging herself on some heavy carbohydrate food. Of course, there’s nothing wrong with enjoying your pregnancy, seeing that it’s pretty much the only time you get to make an excuse as to why you’ve packed on the pounds, but when you are over 200lbs like Kim and continue to put on weight, it becomes a health issue.

Kim is 1.57m tall and weighing around 200lbs, which is 90lbs more than what her average weight should be for her height. Sources say she will easily pack on another 30-40lbs once she gives birth, telling inTouch: “Kim ate the same dish both times — creamy mushroom risotto.” “She also ate bread with olive oil, and the second time she came in she also shared the arancini [fried rice balls] appetizer. She hasn’t just gained 20 pounds like she claims,” another pal tells In Touch. “She’d already gained 45 to 50 when she still had four months to go!”