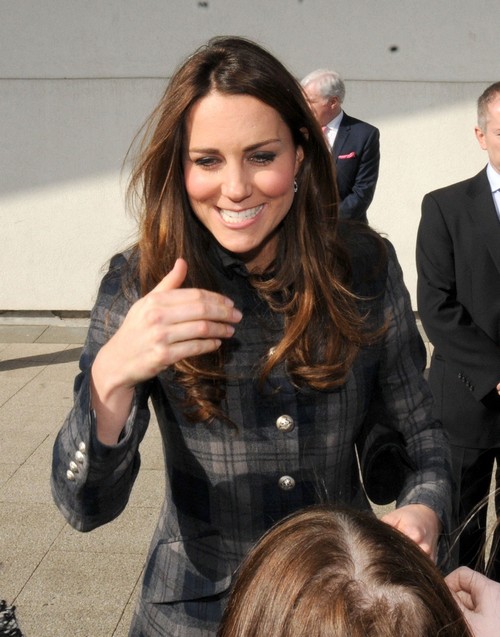 Kate Middleton showed her husband, Prince William, what she was made off as the two enjoyed a ping pong game together during their tour in Scotland. Middleton is definitely starting to show quite a large baby bump on her, despite the fact that she tried to cover it up underneath her jacket, you can definitely see how big she’s gotten.

Nevertheless, the Duchess of Cambridge didn’t let her growing stomach get in the way of the ping pong game as she managed to start off pretty well, beating William twice in a row, before things changed up a little as the Prince finally got the hang of things. Neither of them could actually play for longer than thirty seconds though… what a shame. Ha.

A very cheerful Kate seemed delighted to be doing something other than shaking people’s hands all day as one of her royal duties. When two teenagers noticed that William and Kate were clearly struggling to play a good game together, they joined in to play teams and that’s when things were going much smoother. Ha.

Their stay in Scotland is said to be very short as Kate has many other duties to fulfill next week — she has allegedly signed on for a full timetable next week, leaving her little to any breaks, as we previously reported. Middleton doesn’t want to slow down as she continues to try and impress the public by following in Princess Diana’s footsteps, but maybe she’s trying a little too hard, don’t you think?

If she thinks she can handle it, then that’s fine, but don’t overwork yourself to the point where it may start affecting your baby’s health. But, we’re delighted to say that the video shows Kate looking happier than ever… we can’t tell whether or not that’s because she’s finally getting something to do or it’s because she wants to show people that she’s doing fine. Probably our first assumption is the correct one. Ha.