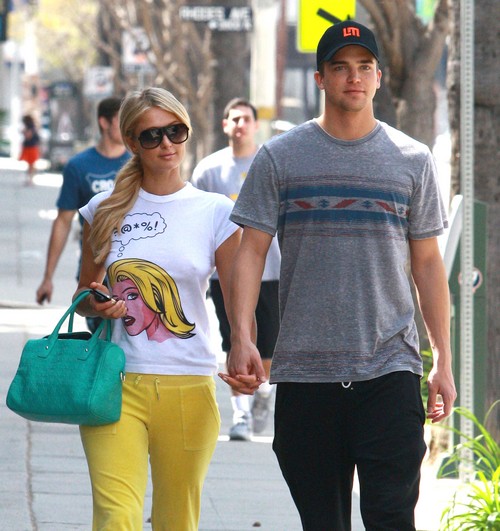 Paris Hilton and boyfriend Spanish model, River Viiperi were spotted yesterday [April 4th, 2013] holding hands while shopping in Studio City.  Paris looking casual chic in yellow jogging pants and a casual t-shirt.  Paris Hilton wore her long blond hair in a ponytail adding to the casual look.  Of course she was carrying one of her signature bags from her collection and wearing the mandatory celebrity shades.  River was also casual in a baseball cap and jeans.

Paris has been very busy this week we got up with Paris on Easter Sunday party at the Playboy mansion where she looked adorable wearing bunny ears and partied with Hugh Hefner and rapper Snoop Dogg.

During her meet-up with Hefner, Paris tweeted to her followers what a fun night she was having at the Playboy mansion, writing on her official page: ‘The Easter Bunny with Hef. Love you @HughHefner. Happy Easter!’

Meanwhile Paris just opened a new store in Columbia and tweeted to let all her fans know about it.  She tweeted, “Loves it ☺ RT @ParisHiltonRd: Loving The New @ParisHilton‘s store in #Colombia Finally Open #YES @PHpurses. So Beautiful! The Best Products”