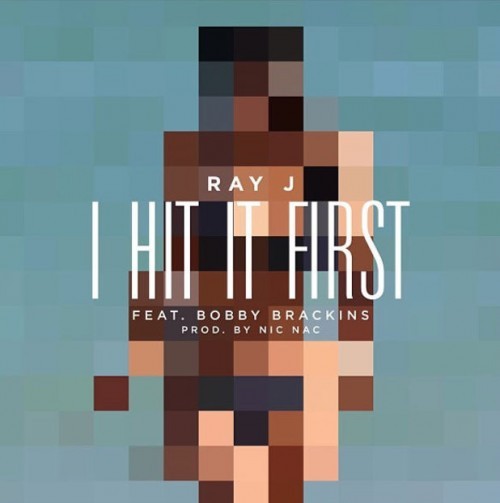 Ray J has gained himself some serious publicity after unveiling the artwork for his newest single, I Hit It First, which is blatantly aimed at ex-girlfriend Kim Kardashian. The artwork shows a blurred version of the reality star on the beach with the song title written over it — clearly Ray J wants us to get the hint he’s referring to Kim in the song. The rapper, most famously known for his sex tape with Kardashian, didn’t hold back in the verses he sings in the song either, writing about how the 32-year old jumps from one man to another, before adding that the only person she should ever be with is with him and no one else. Let’s face it, Ray hasn’t had a hit in around seven years, so what better way to make a comeback than blast your famous ex?

The song was said to have been a joke at first, but when everyone started buzzing about it, it quickly became a single. In fact, Ray is now rushing out a music video with a Kim Kardashian look-alike in the video, showing how the businesswoman gets around with several different men in a short period of time just to try and become famous. For a man to do this makes him look pretty damn pathetic,- no matter how much we hate the Kardashians, this guy is just a silly washed rapper.

The controversial lyrics hear him sing the following lines: “She might move on to rappers and ballplayers. But we all know I hit it first. I had her head going North and her ass going South. But now baby chose to go West. No matter where she goes or who she knows. She still belongs in my bed.”