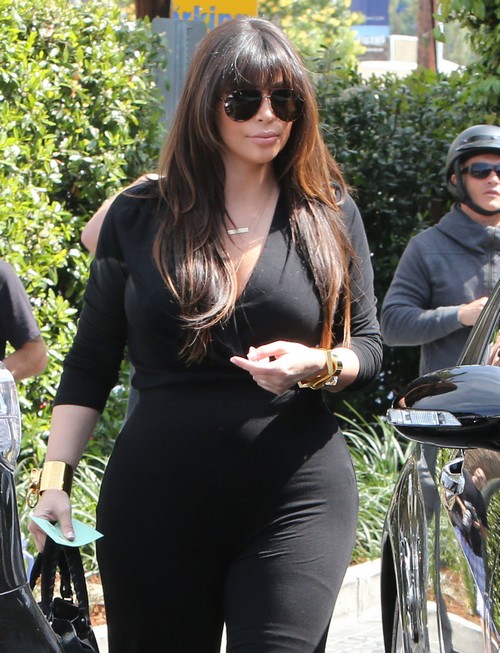 We’ve been hearing for a while that Kim Kardashian was having a girl, including UsWeekly who exclusively broke the story that their sources confirmed the sex of the baby… a female, indeed. Kim, who seemed much more cheerful as she met up with several pals in Los Angeles, was handed over dozens of presents from her friends which were all wrapped in pink colored wrapping paper. If that’s not enough, then how about the pink teddy bears that were seen being handed over to the  32-year old as a present. All the gifts were pretty much colored in pink wrapping paper, which should pretty much give anyone the hint that she’s not expecting a boy right? Unless she plans on having her son dress up in all-pink designer clothes? Ha! Okay… maybe not.

Of course, Kanye West was not there with his girlfriend. The rapper spend some quality time with his future brother-in-law, Rob Kardashian, in Paris while Kris Jenner joined them later on in the evening. Kim didn’t seen bothered that ‘Ye couldn’t make it to the event, she was more focused on having the camera crew capture every single expensive toy she was handed over by her wealthy friends.

“Kanye always wanted a girl,” UsWeekly reported back in February while in that same month, Kim had said that she wouldn’t be telling anyone – other than pals and family – on the sex of the baby as she’s desperately trying to be a much more private person, telling E! News: “I don’t know what we’re having yet. I do want to find out, I do… but I don’t want to talk about it.”

Good luck with your “private life”, Kim! Oh wait – the next season of Keeping Up with the Kardashians is starting in a couple of months. Looks like that quiet life you were telling everyone you wanted to have isn’t happening after all.