Lindsay Lohan Is Made Of Garbage (Photo) 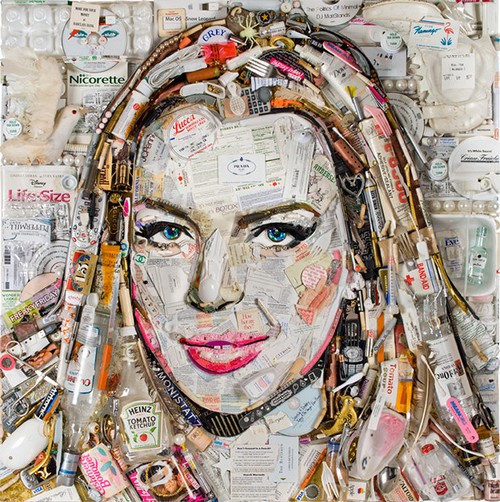 An artist by the name of Jason Mecier took it upon himself to create a so-called artistic piece made out of garbage depicting troubled actress Lindsay Lohan. Go figure. A portrait of garbage made for an actress whose talents amount to garbage. Well played, sir.

Several items in the work are even LiLo-related, including the star’s CDs and DVDs and two collectible “Mean Girls” nail files. Some other choice items found within the portrait: jewelry, sunglasses, credit cards, handcuffs, empty bottles of booze, prescription bottles, and Visine. But the list of art supplies gets a little gross from there.

“I love Lindsay! I’m a huge fan,” Mercier said. “She seems to love publicity and controversy, so I think she will like it. It’s all in fun. This portrait is glamorous and bad ass!”

Does this mean that her career is completely in the crapper? She’s made of garbage in the photo with her insanely inflated lips. How many cigarette and alcohol related items did you find in this trash? Hit the comments and let us know your thoughts on this piece of “art”!