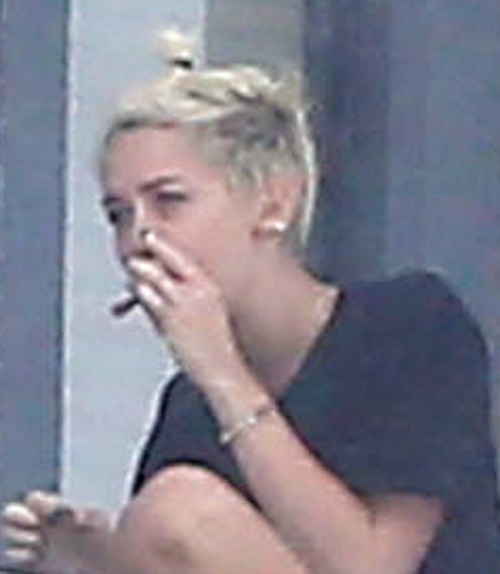 Former Disney teen queen Miley Cyrus is apparently smoking a marijuana blunt on her hotel balcony in Florida. She sure is setting a good example for her many young fans! Ha, just kidding…this is no kind of example to follow for anyone…

From the agency’s description of the photo:

Singer Miley Cyrus and some friends smoking a marijuana blunt on their balcony in Miami, Florida on April 6, 2013. Miley was not wearing her engagement ring even though she says there are no problems between her and fiance Liam Hemsworth.

This isn’t the first time that the singer has found herself in the middle of some drug-related controversy. In 2009, she was spotted at a party, smoking Salvia from a bong. There’s video of that wonderful occasion. So it wouldn’t really surprise anyone if Miley was all like, “Puff, puff, pass!”

What do you think? Is Miley toking on the ganja? Or is this just some hand-rolled cigarette? Hit the comments and let us know what you think!