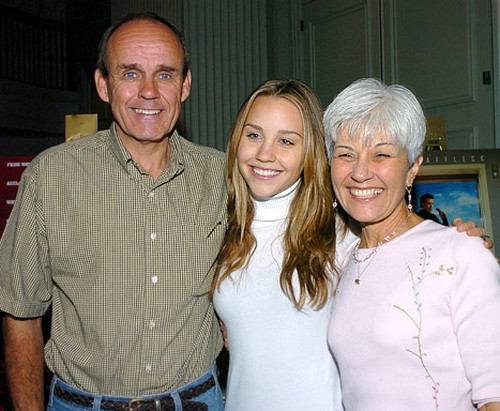 Amanda Bynes‘ parents, Lynn and Rick, weren’t too pleased to hear about the things reality star, Kim Kardashian, had to say about their daughter on the recent episode of Chelsea Lately. The Kardashian sisters recently took over Chelsea Handler’s hosting duties for an E! special, and while the show was already having people buzzing about Russell Brand’s constant jokes, Kim appeared to have been the one who pissed a lot of people off.

During the show, the 32-year old and her sisters spoke about the transformation of Amanda Bynes who has been making headlines in recent months for her unusual behavior; smoking weed whilst driving, locking herself in a clothing store changing room, leaving her apartment door open at night… the list went on.Kardashian’s comments on Amanda and her new style – which sees the retired actress sport two piercings in her cheeks and her usual blonde wig – were that she was totally “obsessed” with the former Nickelodeon star’s change before she continued to add how much she loves the new makeover Bynes had done.

Kim had said the following during taping: “Am I the only one that is obsessed with her new makeover? I think she looks amazing. With the blonde hair and those nails?” The heavily pregnant starlet clearly knew she would create some kind of buzz by praising Bynes’ new look.

Amanda’s parents didn’t find the comments funny at all, especially due to the fact that everybody knows Bynes isn’t in a good place right now; her behavior in recent months has been very absurd, yet she refuses to check into rehab and seek help, telling family and friends that she’s absolutely fine. A source revealed that Lynn and Rick felt like Kim’s remarks on their daughter should have never been made in the first place.

“They thought the remarks Kim (Kardashian) made were in poor taste and are very upset about it,” the insider explained. “It doesn’t take a rocket scientist to look at Amanda and surmise that she is having some sort of crisis. Her makeover is just one example of her troubling behavior. Her parents just wish the media would leave Amanda alone, because it’s only making the situation worse. Amanda is lost and she refuses to get help.”