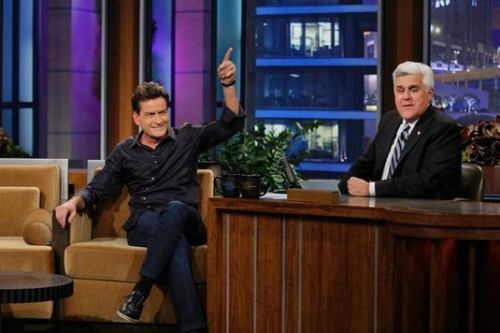 Charlie Sheen appeared on The Tonight Show with Jay Leno on Wednesday night and discussed Lindsay Lohan’s Anger Management shenanigans. He talked to the talk show host about what really happened during Lindsay’s guest appearance on the show.

Charlie said, “Day one was fabulous. She was on time, she knew her lines, hit every mark, made us look off our game. And then we had to deal with day two. It was as though she had us held hostage because she gave us half a show.”
He went on to say, “No, she had an earache and was a little bit….four hours late. No, she was a couple of hours late. She was really not feeling well. We just worked around it. She was late, what can I say! But when she got there she was prepared — with an excuse.”

As for the rumors that she made off with some jewelry pieces from the set. He said, “It’s true but it’s not true. Nothing further your honor. She borrowed some stuff and then was told they would take it out of her paycheck, and she said fine and that’s all it was.”

So basically she thieved the jewelry, got caught and was forced to pay. She isn’t going to get any real help because she doesn’t think she needs it. She’s going to be running in circles forever if she doesn’t change her ways….or she’ll end up dead. What do you think?