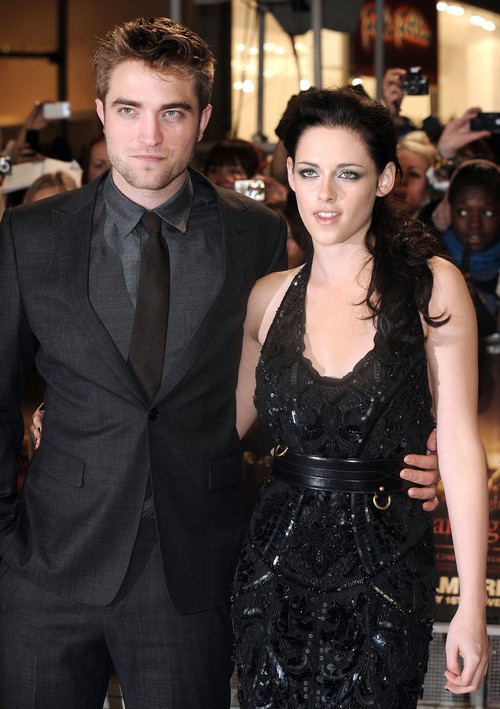 Robert Pattinson proposed to his longtime cheating girlfriend, Kristen Stewart on her 23rd birthday, allegedly presenting her with the ring as his gift on her big day. The actor finally got on his knees after weeks of speculation he had called it quits with Stewart after he refused to allow her to come and see him in Australia for TWO MONTHS.

Whatever his reasons were, he totally made up for it with the $53,000 engagement ring he bought for K-Stew over the weekend. Robert is worth a reported $60 million so the price of that ring is fairly cheap, but maybe the engagement is just to fool the fans by making them think everything’s okay in their relationship? For all we know, they may never get married.Regardless of what may happen in the future, Kristen has bagged herself a nice diamond ring. The two had dined at a local restaurant with a few of their friends where Rob made the announcement which left Kristen speechless, but they’ve been together for five years so the time was bound to come, right? Well, plans to put a ring on Stewart’s finger last year were ruined when she decided to cheat on Rob with Rupert Sanders, leaving her relationship to R-Patz in jeopardy, but the good guy that he is managed to forgive her in the end. How sweet.

But it didn’t end there – Rob had another special present in store for Kristen. Since that present had already cost Pattinson nearly $60,000, he decided that the second present he would give his girlfriend would be something that means very much to him… a collection of pens.

The actor is head over heels in love with pens – it has become one of his obsessions to collect, so after getting in touch with one of his good friends who is a businessman, Robert managed to close a deal on a super rare limited edition white gold Tibaldi Bentley Crewe fountain pen. According to reports, there are only forty of these special made pens in the world, so when Kristen opened her present and saw that her beau had specially engraved both of their names on it, she was brought to tears.

“Kristen has always collected pens, and has a variety of stylish ones,” explained an insider. “Rob decided to go big for her birthday this year and brought her a limited edition white gold Tibaldi Bentley Crewe fountain pen. He had her name specially engraved on it with the year and wording: ‘From R’. There are only 40 of these pens in the world, so it’s a real collector’s item.”