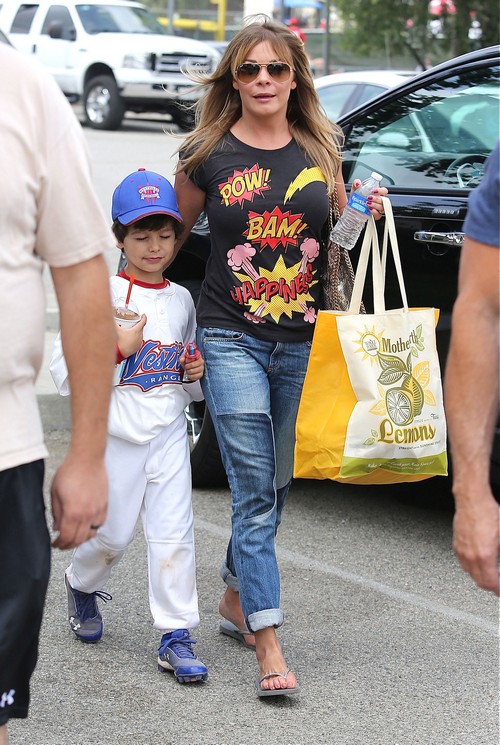 LeAnn Rimes tried her hardest to get Brandi Glanville’s blood boiling yesterday afternoon as they watched the reality star’s son, Jake, play baseball with his team in Los Angeles – even Eddie Cibrian came out to show some support. The kids stayed with their father for the weekend, which would explain why LeAnn was there in the first place, yet her presence didn’t go unnoticed.

She stepped out of her vehicle as photographers snapped her putting her hands around Jake as she followed him to the field before she took a seat on the bench with husband while a lonely looking Brandi was seen standing by herself as she cheered on her son during the game.Rimes clearly thought she had won this battle between Glanville in their on-going feud with each other, yet she failed to realize how desperate she looked as she placed her hands on Jake’s shoulder whilst looking at the photographers, almost as if she had done it purposely to piss of Brandi. Very sad and pathetic, right?

Neither Eddie nor Glanville made the effort to greet each other as they both watched Jake from a far distance between each other, but that’s probably because LeAnn was there. Could you imagine the amount of fights that would have gone down if they were next to each other? Yikes. But regardless of the icky situation, it’s still good to see that both parents are willing to put their differences aside by attending their son’s baseball match.

It’s only a matter of time before Brandi’s kids realize what kind of a jerk their father really is. To see LeAnn’s desperate attention-seeking behavior at Jake’s baseball game yesterday afternoon, look no further than below and tell us what you make of it: