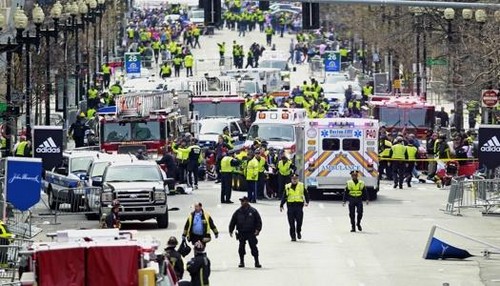 Reports are coming in that a suspect in the deadly Boston Marathon Terrorist Bombing has been captured! A Saudi Arabian national is being held in hospital by authorities and he is suspected of being one of the terrorists responsible for the bombings. It seems the terrorist was injured either in the blast itself or while being apprehended by law enforcement.

As more reports start to come in from Boston in the wake of the attack at the Boston Marathon, the number of dead has been confirmed at 2 and the injured at 28.

Investigators have a suspect — a Saudi Arabian national — in the horrific Boston Marathon bombings, The Post has learned.  Law enforcement sources said the 20-year-old suspect was under guard at an undisclosed Boston hospital.

It was not immediately clear why the man was hospitalized and whether he was injured in the attack or in his apprehension.  The man was caught less than two hours after the 2:50 p.m. bombing on the finish line of the race, in the heart of Boston.

In addition, Boston police have has surveillance video of someone bringing multiple backpacks to blast site, according to CBS News.

This is a sad day for America and the world. There will be consequences for this terrorist attack on America!