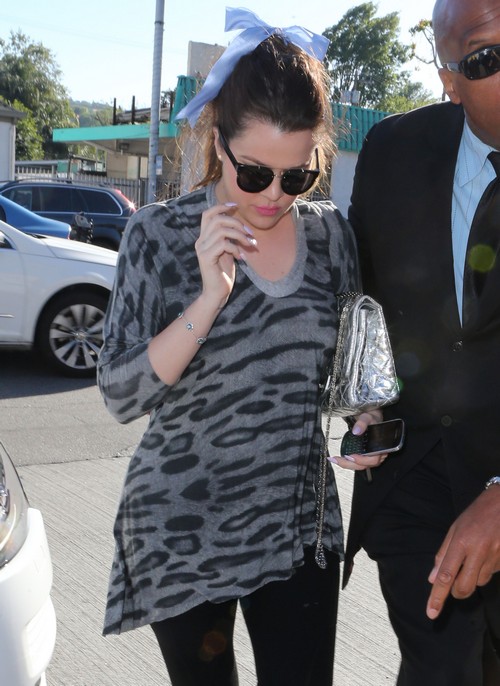 Khloe Kardashian has admitted that her sister, Kim Kardashian, wasn’t comfortable with her fuller figure during pregnancy, especially after tabloid magazine reported that the reality star was addicted to junk food and weighed in at 200lbs a month ago!  Wowza.

Although Kim denies having ever been that heavy, she was definitely not feeling her usual self, if you know Kim, you’d be aware of how many photos she usually uploads of herself in a bikini, showing her booty and all of that other pointless stuff she does to make money. Ha!

Khloe says that it has taken the 32-year old a lot of time to adjust to pregnancy, almost six months to be exact, but now that she’s getting closer to her due date, she’s accepted the fact that she may be adding a couple of more pounds, but at the end of it all, she’ll have a baby by a very rich rapper named Kanye West who is loaded with cash — $100m to be exact.

Khloe dished to E! News about how Kim is feeling lately, “I think she’s finally feeling great about her pregnancy.” She also added that her sister was frustrated when her baby bump was not showing, but her weight was going up. She said, “There’s an awkward time, you’re not really showing, you don’t feel like your old self.”  LOLz, Kardashians and their stupidity — we’re starting to understand why people are so in love with this train wreck family.

Meanwhile, Khloe is eager to start a family of her own – she has already tried fertility treatments as she plans on welcoming her own baby to the world possibly by early next year. Though she continues to claim that she’s waiting for the right time, we all know Khloe is desperately trying for a baby. Good luck to her.