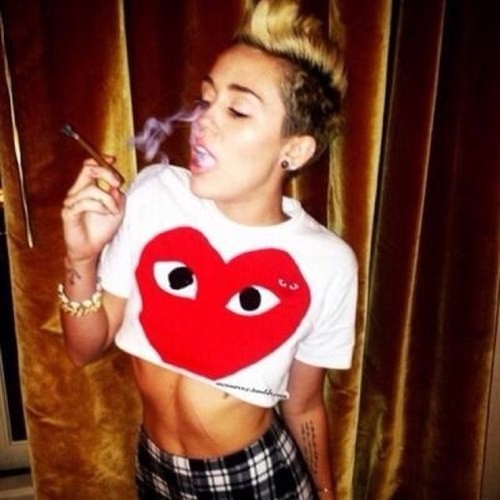 Miley Cyrus has been caught once again taking a turn on smoking a roll-up of weed during a night out with friends on Sunday night. While her fiance was busy promoting his newest movie Hunger Games: Catching Fire at the MTV Movie Awards, it looks like Cyrus couldn’t even be bothered to support her man since she was too busy getting high.

Video footage was sent to TMZ which shows the 20-year old at the Greystone Manor in Hollywood, taking several puffs on the “cigarette”. Note that Cyrus has never actually said she smokes weed, possibly trying to deny it so her younger teenage fans don’t get upset with her, but this is now the fourth time Miley has been seen smoking weed.
In the video, an onlooker captures the singer as she’s surrounded by her close friends who didn’t stop her from smoking the blunt either, especially since she was in a public area. Maybe Miley wanted to get noticed by the people in the club to draw some kind of attention to herself. Who knows?

Regardless of her constant weed smoking, she’s still left with her troubled relationship to Liam Hemsworth who is supposedly “just her friend” according to Miley’s father, Billy Ray Cyrus. He claims that the singer and her fiance are nothing more than just pals, which must mean that they are no longer together, right? It definitely seems like Miley’s life is very messy; though she’s gearing up to release a new record, she’s hurting her reputation with this constant bad publicity that she’s bringing on to herself.

Just last week whilst touring in Los Angeles, Rihanna stopped by the Greystone Manor too where she was also seen smoking weed with her friends — it’s almost as if Greystone was the go-to place to smoke all of your blunts without having anyone judge you for it. Well, Miley you’re old enough to make your own decisions, that’s for sure.