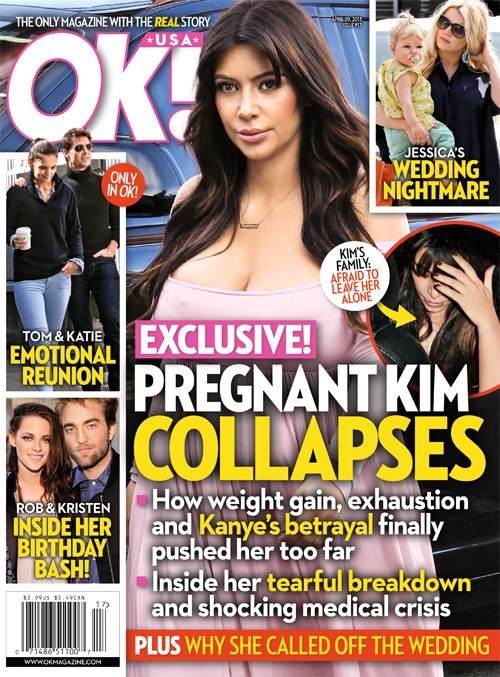 Kim Kardashian has finally reached her breaking point, reports claim. The reality star fainted after having become overwhelmed by the stress she has been under with her busy work schedule. Kim is said to have been dealing with depression, OK magazine’s sources claim before adding that Kanye West‘s absence from most of her pregnancy has really saddened her.  A source reports, “She’s upset he went out of town. She worries he won’t be there for a lot of the baby’s firsts.”

It’s gotten to the point where Kim cries herself to sleep at night, knowing that she will not only have several appearances to do, but there’s no one by her side to support her through it since Kanye refuses to visit her in Los Angeles. The mag states that Kim has made several visits to Paris since announcing her pregnancy while her rapper beau uses the excuse that he’s busy working on a new album.

Regardless of Kanye’s situation, he can always record his album in LA, right? Something sounds fishy here! Perhaps he wants out of the relationship? Well, Kim is noticing how he’s pushing her away, and while she’s still trying to adjust to her heavier figure – since packing on 50lbs – Kim reached her limit when she fainted during a phone call to her mother.

It was nothing too serious, but it was enough to have momager Kris Jenner check up on her daughter to make sure the 32-year old was still fit enough to make some money for the family. As sickening as it sounds, that’s how the twisted mind of Kris works! OK!’s insiders say that in a phone call to her mother, Kim sounded frustrated by the lack of support from her man, she was worried that she would not be able to lose the weight to get back into her curvy figure.  An snitch revealed, “Kim seemed inconsolable so Kris rushed over.”

Kim was also said to have told Kris she had been arguing with Kanye over his upcoming schedule for his tour – in which he will fly around the world to promote his album. The reality star has no clue how she’s going to cope by herself while Kanye is gone for months at a time — she’s absolutely distraught: “Kim told him she didn’t want to marry him if he wasn’t going to be there to support her and the baby emotionally.”