Kim Kardashian Blames Her Pregnancy For Ruining Her Life 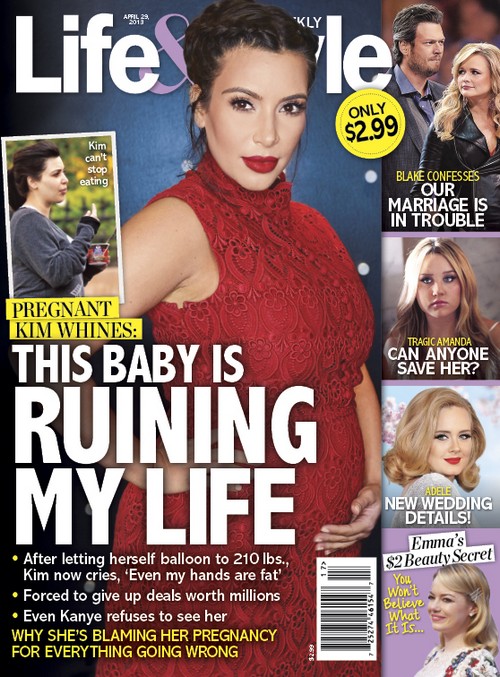 The current issue of LIFE & STYLE magazine features the cover story, “This Baby Is Ruining My Life.”  Reality Star Kim Kardashian is pregnant with her first child and according to the magazine is devastated, her baby’s daddy Kanye West is so disgusted with her he does not want to see her.  Kim has allowed her weight to balloon to a whopping 210lbs according to Life & Style Magazine and she is crying, “Even My Hands Are Fat!”

Kim has been forced to turn down deals/offers and has lost millions of dollars.  Of course Kim is blaming everything that is going wrong on her pregnancy.

Life & Style reports: “Pregnancy hasn’t been a labor of love for Kim Kardashian. Since conceiving, she barely sees her unborn child’s father, Kanye West, her career is on a downslope and she’s lost her once-lusted-after figure. Things have gotten so out of control that the star’s now even second-guessing her decision to become a mom. Plus, ice cream and French fries and bacon, oh my! How she’s eating away the pain.”

I guess the pregnancy is not turning out to be the cash cow Kim thought it would be.  What do you think Hollywood Hiccupers, true or just the magazine and more groundless speculation?  Hit the comments and let us know your thoughts!