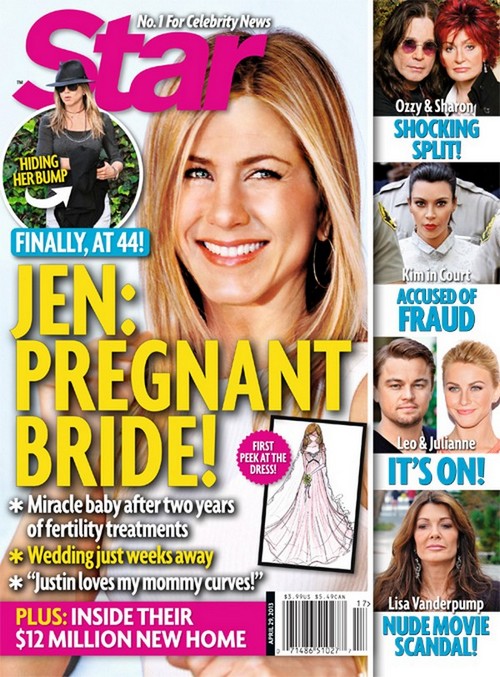 Jennifer Aniston is pregnant after going through in-vitro fertilization treatments for two years. That’s the latest scoop from Star magazine. Can you believe that? Why would anyone want to start having IVF treatments at the age of 42?  According to their insider, “She actually started having fertility treatments six months into her relationship with Justin!”

We are completely skeptical about Jennifer Aniston’s so-called happy news. We’re guessing that she nor her fiance Justin Theroux are aware of how many fictitious babies the tabloids put in her belly. Ha.

The tabloid reveals that Justin and Jen’s wedding is only weeks away. She’s a pregnant bride — thus the headline. Finally at the age of 44-years-old, she can appear on the cover of Star magazine and subsequently “hide” her baby bump. She must be so proud.  A source revealed, “ When she found out it worked and she is having a baby, she burst into tears. To say she is happy doesn’t come close! This means everything to Jen.”

What do you think of this pregnancy announcement? Should someone break the news to the happy couple that she’s pregnant? Or will the tabloids ever realize that maybe Jennifer doesn’t really want to have any children of her own? Why is it so important to the magazines to make up such lies week after week?