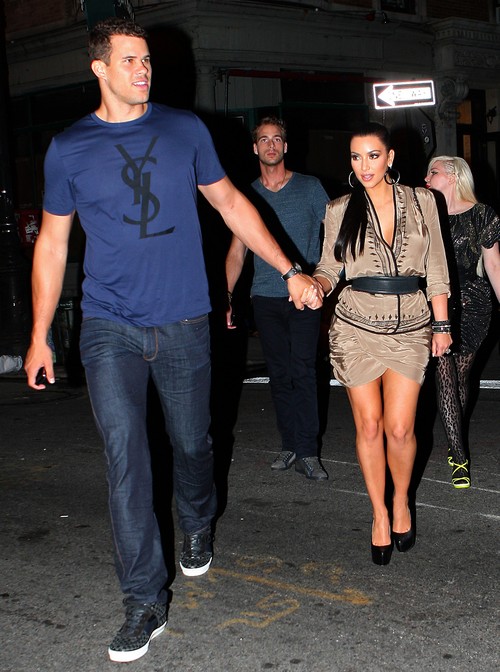 It looks like Kris Humphries may be coming to his senses after all and drop the lawsuit against his ex-wife, Kim Kardashian, who he claims  used him to cash in on millions of dollars. As we all know, these two have been fighting it out since November 2011, the NBA baller has refused to sign off the divorce papers and instead filed an annulment against Kim for manipulating him and committing fraud.

However, now that the case is is slowly reaching trial, Kris is starting to realize that his chances of winning the case are very unlikely.  There are several reasons; he has no valid evidence that Kim and E! Entertainment re-edited scenes in the show to make him look like a bad guy and damage his reputation, neither has he got any evidence of documents that show that the reality star used him for money.

And as we all know… without evidence, there’s pretty much no point in a trial, right? That’s exactly what Kris just realized. His chances are very low, and the fact that he was a no-show at Friday’s court settlement in Los Angeles didn’t sit too well with the judge. Kim on the other hand was present and on time, so anything she does at this point could be in her favor.  The judge turned down Kris Humphries’ request to have cameras film the trial to publicly humiliate her.

Both Kim and Kris have already spent up to $300,000 in lawyer fees, and the worst thing about this is that if Kris does go ahead with taking the whole thing to trial in May and he ends up losing the battle, Kim could easily ask him to pay her attorney fees. It’s a very messy situation, but Kris pretty much brought it  on himself.  TMZ reports, “If the case goes to trial and Kris loses, he could be in the hole for as much as a million bucks in attorney’s fees.  Sources tell us each side has already racked up $300k in lawyer’s fees, and they’ll spend another $200k if the case goes to trial.  We broke the story, if the case goes to trial and Kim wins, she’ll ask the judge to make Kris pay HER lawyer’s fees.”

So, there’s no evidence. He’s spending a lot of money on lawyers that have got nothing to work with since there’s nothing the NBA baller can provide them with that could be useful to take Kim down in court. Sources say that Kris may give in at tomorrow morning’s re-scheduled court settlement — if the two can come to some kind of agreement, the divorce will be finalized, but if not, Kim will make sure Kris is going down!
Meanwhile, Wanna know who Kanye West is creeping with while poor Kim Kardashian is carrying his baby?  Go HERE!