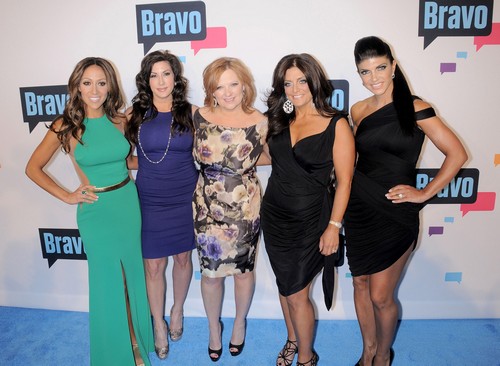 In a surprising twist, Teresa Giudice and Jacqueline Laurita have managed to overcome their differences – as seen on the show – and rekindle their friendship with each other. You may recall the episode when the two were at a fashion show and things were starting to get heated, before a fight between the two broke out.

Quite surprisingly, Jacqueline and Teresa have been working to get their relationship back on track. What’s very odd about this is that Teresa isn’t exactly the type of person who would try and make up with someone unless she honestly believed she was in the wrong, so maybe this is her way of saying ‘It’s my fault, I’m sorry?’

Sources say that the two have been talking a lot since their fight. It’s not the first time that the reality stars have gotten into some kind of feud with each other — they looked at their recent fight as not being a big deal.  Now they just want to move on from it and get back to being on friendly terms. “Even though they have had a lot of bad times together they’re making an effort to not fight and not hurt each other,” RadarOnline’s sources state.

There’s no doubt in our minds that these two are going to have many more fights and feuds because Teresa is never going to like anyone as much as she likes herself.  We’ll give it a couple of weeks before we see these two at it again. And hopefully the cameras capture all of it again,- we’d be lying if we didn’t say Teresa’s constant fights weren’t the reason the show is so popular.