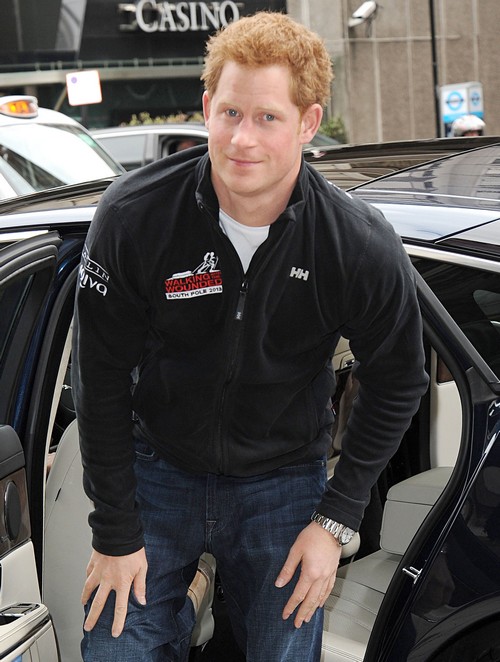 Prince Harry is an entertainer, that’s for sure. The ever-so-scandalous 28-year old had made a visit to the London Marathon where he was handing out medals, but it didn’t take long for citizens to question him on why he didn’t run this year, seeing that he usually always does it , William, too.

Harry was bombarded with questions upon his arrival, so when one woman shouted why he decided to bail on the marathon, he quickly responded by saying; “Oh here we go, my knee is bad,” as he pretended to be in pain while hopping on one leg. We’re assuming that he’s just making a joke about the whole situation — he was probably just too lazy to get up on an early Sunday morning and go for a long jog. Ha.During last year’s marathon, Harry said that his brother William and wife, Kate Middleton, would be doing it this year, so when another onlooker asked him why his older brother wasn’t taking part this year, the ginger fella jokingly mocked his sibling: “I know, I know, but what can you do — he’s getting old and she’s pregnant”. Umm.. who says pregnant women can’t go for a jog? We kid, we kid!

Security who guarded the royal family weren’t too sure whether or not it was a good idea for Harry to attend the London Marathon, after the terrible bombing in Boston killed three and injured 150+ people, yet Harry confirmed days ago that he was still going to support the fellow Brits. Awww, what a good guy — let’s hope he isn’t too lazy to run next year. Ha.