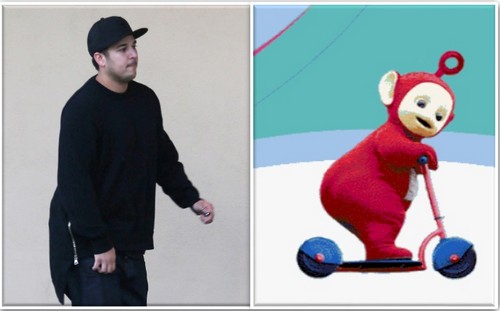 Oh what it must have been like to grown up in a house full of vain shallow Kardashian women…… So I guess it is  understanding that when Rob, who has porked on 40lbs was caught shirtless in all his glory by a photog, the poor thing went a little crazy.

Robbie was training with celebrity trainer Gunnar Peterson trying to regain his former emmmm swelve body and he removed his shirt in a parking lot.  Of course, like the rest of the Kardashian clan, Rob was not gifted with a lot of brains and it never occured to him that one of those many photogs that follow him might take a picture, duh!

Low and behold, a female photo snapped the perfect pic of the Teletubbie and Rob went a little nuts.  He grabbed her camera, stole her memory card and just to remind her not to do it again, he slapped her in the face.

Police were called, Rob was taken away but later released.  No charges have been filed yet and Mama Kris Jenner is trying to make sure they don’t get filed.  It seems Rob did what all boy do when they get in trouble, he ran to his Mommy.  Kris is on the hunt for the photog.  “Kris is calling all of her contacts and anybody else that might know who this woman is,” said a source. “She’s desperate to find this pho­tographer so she can pay her off to get Rob out of trouble, and she’s throwing around HUGE dollar figures to make it happen.”

Watch our female photographer, Kris Jenner always gets her women!