Eddie Cibrian Has Been Tweeting Brandi Glanville – What Will LeAnn Rimes Say? 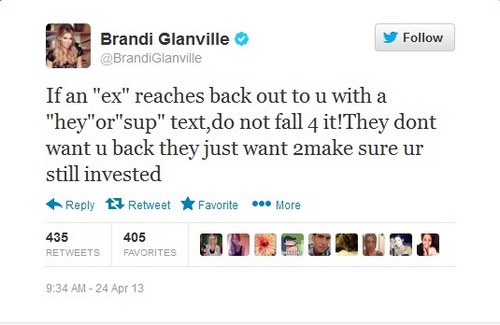 I have to say, some of Brandi Glanville‘s dating advice – learned from the school of hard knocks- really does ring true.  Her book is still selling like gang busters and she has emerged as a whole lot more than Eddie Cibrian’s poor ex wife.  She has instead built herself a career out of speaking the truth, even when it makes her ex look like the cheating douche bag that we know he is.

This week Brandi tweeted this ditty,” If an “ex” reaches back out to u with a “hey”or”sup” text,do not fall 4 it!They dont want u back they just want 2make sure ur still invested,” see the tweet in the image above.

Of course, anyone familiar with Brandi is now wondering if this is an obvious insinuation that Eddie has been in touch about a little more than scheduling visitation with his two sons. Even if Brandi doesn’t mean Eddie I’m sure that she loves the speculation because that alone is enough to make Eddie’s current wife, LeAnn Rimes want to slit her wrist with a butter knife.

After all of the negative publicity, would Eddie have the nerve to try and get something started again with Brandi? I could see it. He loves the challenge of bagging chicks while sneaking around. The shakier the situation, the better. Getting his ex to cave in again would be a major coup for Eddie. He has gotten nothing but negative crap since hooking up with LeAnn. At least he never dealt with any of that while married to Brandi. Do you think he is missing his former life, even just a little? Do you think that Brandi would ever entertain the idea of going there again? I’m going to say no. Tell us your thoughts in the comments below!