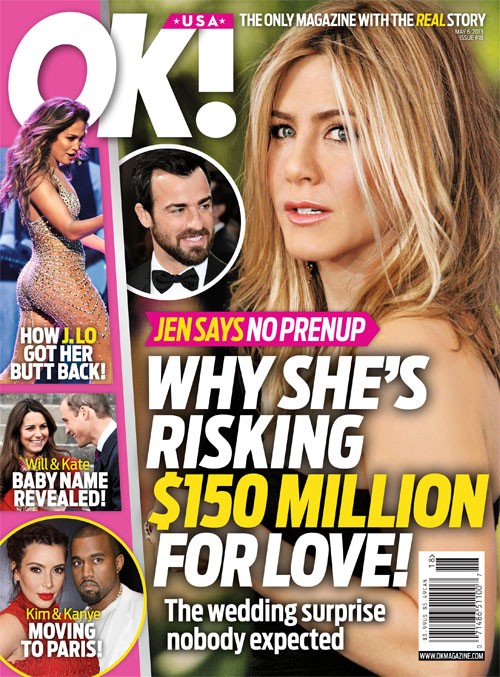 Jennifer Aniston must be pretty damn sure that the love she has found with Justin Theroux is the real deal. I say that because the chronically unlucky-in-love (at least until now) actress has decided that a prenup is not necessary this time around. While many Hollywood celebs wouldn’t dream of tying the knot without making sure that their finances are protected, Jen doesn’t want to make this marriage about business and so she is choosing to risk 150 million rather than make Justin sign any sort of financial agreement. The latest issue of OK has an in depth look at how she is choosing to do things differently and has quite obviously decided that marrying Justin is far more important than protecting her assets.

Also in the new issue there is information on Kanye West and Kim Kardashian. Rumors swirl around these two. We had heard that Kanye had dumped his baby mama and truly, they have only been together a handful of times since announcing the pregnancy last December. Kanye seems to be sending a pretty clear message to Kim that, pregnant or not, if she wants to see him then she better be hopping a plane to Paris because that is where he is primarily staying nowadays. According to OK Magazine, Kim is said to be contemplating a move to Paris, but is she really going to do that? One of her biggest issues while briefly married to Kris Humphries, was the fact that he wanted to leave L.A. To raise a family. Is Kim likely to leave her family and job opportunities behind to be by Kanye’s side?  I’m not convinced so I guess I’m going to have to grab a copy of OK to read more .

Is Jen stupid for not demanding a prenup? Should Kim move to Paris or just suck it up and be a single mom with the help of her family? Tell us your thoughts in the comments below!