Isabella Barrett Is A Millionaire At The Age Of Six! 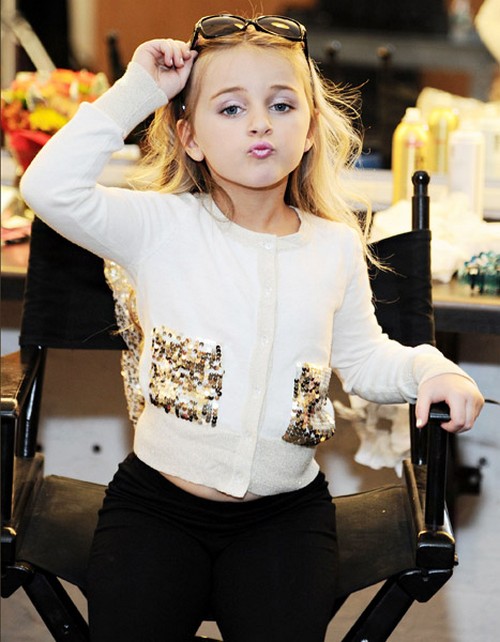 Former Toddlers & Tiaras star Isabella Barrett is a millionaire at the age of only six-years-old! Holy cow, can you imagine having that kind of wealth at such a young age?!?

If you’ll recall, Isabella was on the episode of Toddlers & Tiaras where she referred to her rival Paisley Dickey as a “hooker” for dressing up as Julia Roberts’ character from Pretty Woman. During her interview on April 25th on Good Morning America, she dropped the bomb, saying, “I’m a millionaire!”

Isabella has a reality show in Germany and already has her own company, Glitzy Girl. The company sells jewelry, velour hoodies and lip gloss. Part of the proceeds from the company go to benefit an anti-bullying campaign, as well. Her mother Susanna said, “It’s nice that we can customize things to really raise money to really raise awareness.”

Us Magazine has more details:

The self-proclaimed millionaire and her mother aren’t sticking to a budget, either. Isabella owns more than 60 pairs of shoes and has her own pageant room worth more than $100,000. She once spent more than $1,000 on room service. “We ordered, like, ice cream and chocolate cake,” Isabella said. “My daddy freaked out!”

During a recent trip to L.A., Isabella purchased 14 Juicy Couture track suits. “I bought so much stuff it wouldn’t fit in the car,” Isabella said on Good Morning America.

Susanna isn’t worried about spoiling her daughter, given that Isabella “is educated, she’s cultured and she speaks four languages.” The stage mom added, “At the end of the day, it’s perception. Some people buy some things for their kids that I’m like, ‘Oh, my God, I would never, that’s a little extravagant.'”

She looks like a little Paris Hilton, doesn’t she? What do you think of her gaining such an enterprise at the age of six? Hit the comments and let us know your thoughts!