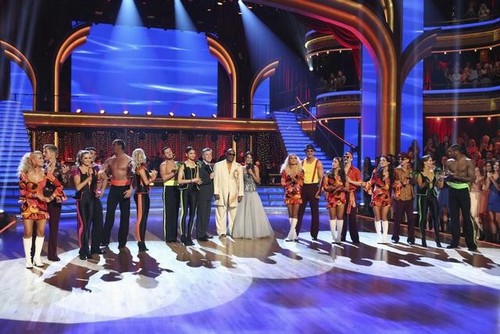 In a new twist and another “Dancing with the Stars” first, the couple with the highest overall score for the night will be granted immunity from elimination on Tuesday. The couples who do not receive immunity will then compete in a dance-off to earn extra judges’ points in an effort to increase their overall score.

The show will also feature music by Grammy winner and Spanish language rock artist Juanes, who will perform a medley of his hits, including “La Camisa Negra” and “Cumbia Sexy.”

Below are the dance assignments for the week:

On Tuesday’s elimination show one couple will be eliminated. The show will feature music by Michael Bublé who will perform “Come Dance with Me” off his new album, “To Be Loved.” The show will also feature its second “AT&T Spotlight Performance” of the season, focusing on youth organization the Camden Sophisticated Sisters and its founder, Tawanda Jones. This “Spotlight Performance” will feature an inspiring routine by eight members of the organization. In addition, “Macy’s Stars of Dance” returns for its fourth installment of the season.