Johnny Depp and Amber Heard Back Together again 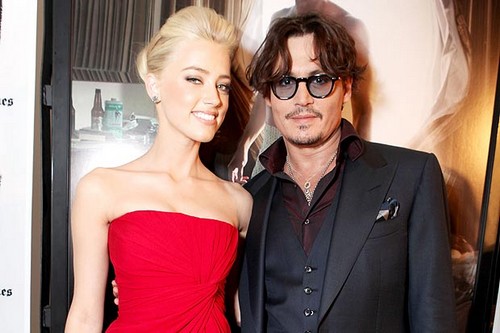 In the last year I’ve been more than a little confused by the pairing of Johnny Depp and Amber Heard. If you remember he split with his partner of forever, Vanessa Paradis and quickly moved on to date bisexual Amber Heard. The two were an item for a few months and then things appeared to fizzle out. I kind of thought maybe this was a rebound for Johhny but guess what, they were caught holding hands on Sunday night at the Rolling Stones surprise concert.

Now we’re hearing from a source at the National Enquirer that the two have actually been together more often than not over the last year. Back in January Amber was leaning heavily on Johnny to go public with their love affair and when he refused then she walked out and hooked up with her occasional girlfriend, Tasya VanRee.  As expected Johnny absolutely freaked out, realizing just how much he needs the stability that Amber brings to his life.

They are obviously back together and rumored to be very serious. It sounds like Amber is about to get that public acknowledgment from Johnny that she has been waiting for.  He’s such an eccentric character, do you think that Amber compliments that? Supposedly she brings a lot of organization to his typically discombobulated life.

It’s funny because when it comes to fidelity, my mind always kind of wondered if Amber was capable of being loyal? If her first instinct the last time he disappointed her was to stray, do you think it’ll become her normal course of action when they are at odds? Is Amber one of those people that needs to get attention from somewhere and will go elsewhere if you don’t meet her demands? Tell us your thoughts in the comments below!