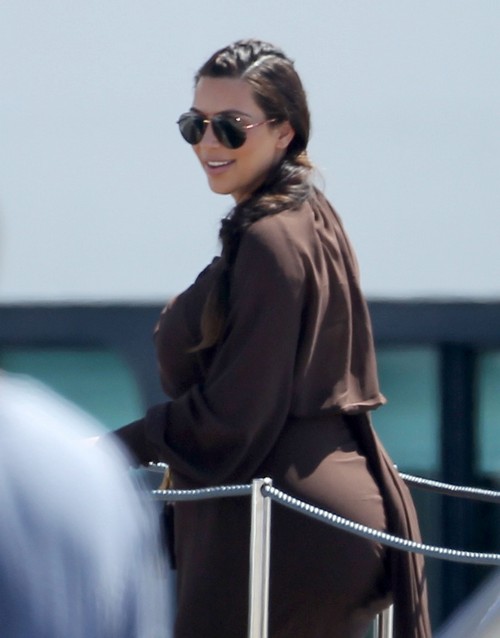 The worst year of Kim Kardashian’s life continues, as the reality star and her sister Khloe Kardashian were recently forced to take a trip to Greece. Each year the family has to take a luxurious trip, paid for by E!, to be filmed for Keeping Up With the Kardashians. It’s always intended to be one of those trips that makes everyone watching jealous, but I suspect few of the reality shows’ viewers would want to be along for the ride with Kim now.

According to RadarOnline Kim is getting more miserable by the minute. She wanted Kanye West to come along but he bowed out, as expected.  Nobody likes dealing with a misery princess, especially when you didn’t intend to knock her up in the first place!

“Kim Kardashian is just so over being pregnant. She is complaining about the humidity in Greece, and just wants to finish filming so she can nest with Kanye. Kim wasn’t surprised that Kanye declined to join the family in Greece, she is really frustrated that her life is controlled by the reality show commitments.”

I’m going to state the obvious here, Kanye hasn’t exactly been with Kim anyway. They’ve only spent 24 days together since her pregnancy was announced, so Kim could go home to nest but I bet she would do it alone.

Here’s the real question, how involved is Kanye going to be after his child is born? Do you think that he’ll actually be involved with raising the child or is he going to be a glorified baby daddy?  This clowns lack of involvement has to make Kim think Kris Humphries might not have been so bad after all. At the very least he would have supported her through the pregnancy! Tell us your thoughts in the comments below!