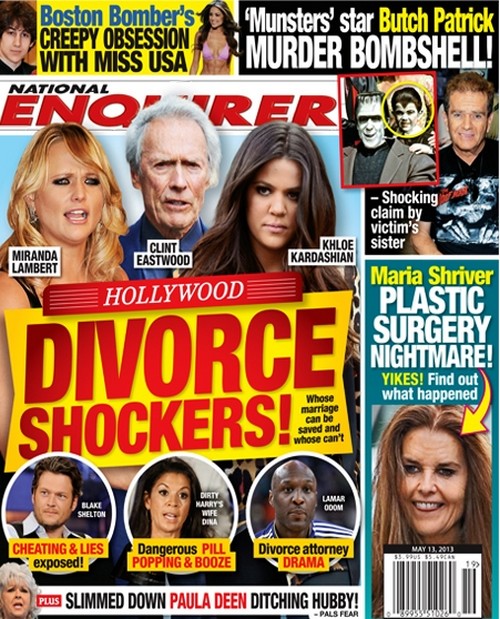 It appears that celebrity divorces are the “in” thing if the latest cover of the National Enquirer is to be believed.

First up for the magazine is the top article on the Boston Bombing suspect and his infatuation with Miss USA. What was that psycho up to that caused him to be so obsessed?!?

In addition, the featured article centers on the celebrity divorces of Miranda Lambert, Clint Eastwood and Khloe Kardashian. It’s been rumored that Miranda has been having troubles with Blake Shelton, but she recently said that she would be standing by her man. In addition, we’ve recently learned that things are less than stellar between Clint and his wife. Lastly, there has always been rumors about things going downhill between Khloe and Lamar Odom, but every time a new report pops up, Khloe denies it.

Of course, the magazine is also reporting that Maria Shriver has had some creepy looking work done to her face. She looks like a freaking monster in their “plastic surgery nightmare” piece on Maria. Is this what 25 years of marriage to Arnold Schwarzenegger will do to a woman?!?

What do you think of the latest cover of the tabloid? Are any of their divorce “shockers” really that shocking at all? Hit the comments and let us know your thoughts!