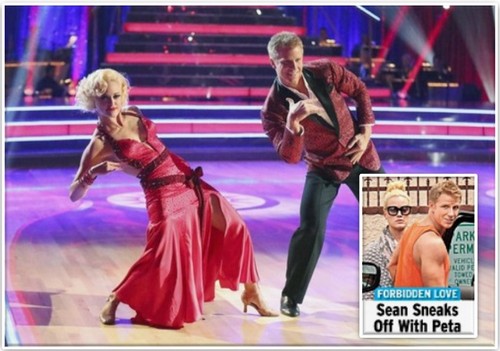 Isn’t it about time for Sean Lowe to come clean about his love life?  The former Bachelor may have proposed to Catherine Giudici but that engagement seems to be anything but solid. She relocated to L.A. To be close to her new man and he promptly took a spot on Dancing With the Stars, where he was paired with newly single, Peta Murgatroyd.  As Catherine sat home alone with no job and zero friends, Sean has been spent 8 hours a day perfecting his bump and grind with Peta.

According to the May 13th edition of In Touch Sean has been sneaking around with Peta outside of the studio as well. In recent weeks Catherine has been spotted out, drinking alone and rambling to complete strangers about what a lying douche Sean actually is. Supposedly  Catherine had agreed to marry prayer warrior Sean who was a good, loyal man. Instead she got a typical party guy that would rather fly his friends in then spend time alone with her.

As for Sean’s platform of celibacy, that’s not real either. Catherine was really worried  that he would cheat because they have been having sex since the night he proposed. She actually felt that  if he were celibate then maybe she could trust him to be loyal. Obviously that’s not the case and the sooner Sean come clean the better. I don’t think very many people believe that he and Catherine will really be getting married. If anything she should be booking a one-way flight home to Seattle. At least she had a career and friends there to support her!

As for Sean and Peta, this romance will end a week or so after he gets cut from DWTS. Peta will have gotten what she needed and move on to her next partner, don’t you think? Tell us your thoughts in the comments below!