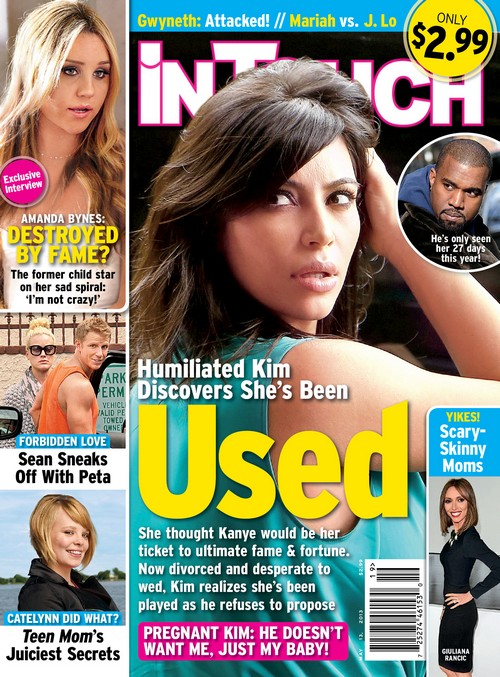 The cover of In Touch Weekly blares, “Humiliated Kim Discovers She’s Been Used.” Really, she’s figured that out just now? Kim Kardashian is not the smartest cookie, is she? Not if she thought that she and Kanye West would get married.

The subtext states, “She thought Kanye would be her ticket to ultimate fame & fortune. Now divorced and desperate to wed, Kim realizes she’s been played as he refuses to propose.” Basically, the story states that Kim realized that Kanye wanted her baby, not her.

Ok, firstly – have you guys seen that video where Kanye doesn’t open the door for Kim? Hilarious, right? And also a perfect indication of Kanye’s personality. He’s an A-list singer and all that, but he just doesn’t give a crap. So I have no problem believing this story.

It’s pretty clear that he first got together with Kim because of physical reasons. I won’t list them out, but they begin with the word A and then ends with SS. They had sex and got pregnant, probably because he refused to use a condom. He realized what a mistake he’d made dating her in the first place, but by now, his public image would take a huge hit if he dumped her right after she became pregnant – and he probably wanted the baby. So he figured, wait until the baby’s born and maybe a little longer, and then break up with her.

Because really, does anyone think that Kanye will propose to Kim? I might be eating my words in the future, but the dude honestly doesn’t seem to give a rat’s ass over her.  He just wants little Kanye Jr. Besides, he’s barely spending any time with her to begin with.

Do you guys think that Kanye and Kim will get ever get married? Or will Kanye just refuse to propose and break up with her eventually? Let us know what you think in the comments.