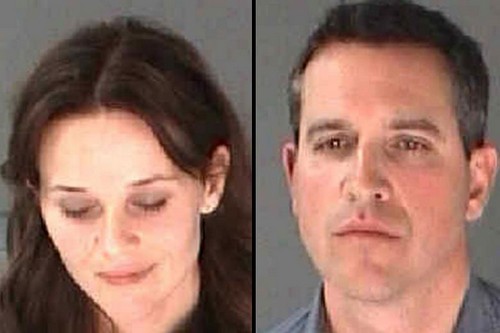 Reese Witherspoon has pleaded guilty to her disorderly conduct charge. Ha. Reese Witherspoon was arrested, that is just too funny. What was even worse was how she infamously pulled out the celebrity card and asked the cop if he knew who she was. Gotta love this girl, she’s so wacky.

Her husband, Jim Toth, was arrested for driving under the influence. And instead of minding her own business, she opened her yap and got her tookus placed in cuffs, as well. Jim pleaded guilty to his charge, but Reese pleaded no contest to hers. TMZ has the scoop:

Reese — who was not present but represented by her lawyer, Bruce Morris — entered the plea to physical obstruction of another and will pay a $213 fine, and that’s it.

As for Jim, he was in court and pled guilty to driving under the influence. He’ll get no jail time but he must perform 40 hours of community service and attend an alcohol education program. He’s been placed on probation for 12 months.

The judge said to Jim, “Consider yourself fortunate you didn’t injure your passenger [Reese] and didn’t kill anyone.”

At least they didn’t try to pull out the celebrity card in court, so there is a first! What do you think of these two taking responsibility for their wrongdoings? Hit the comments and leave us your thoughts!