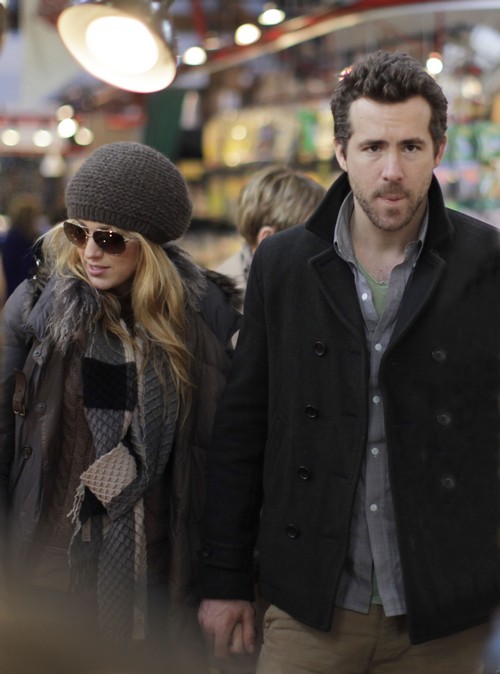 Ryan Reynolds and Blake Lively have become quite the boring, married couple. For two people whose lives were featured so prominently in the tabloids just a few years ago, it’s quite a change of pace for them – and an admirable one at that. Of course, the tabloids have resorted to making up stuff now, because they can’t just keep writing on how happily married they are, can they? First, it was something about Ryan watching too much television. Now, Star Magazine reports that both Ryan and Blake are starting to feel the effects of ‘their quickie marriage’, and that Ryan is controlling his wife’s life and career.

Star says that Ryan has taken ‘control of Blake’s wardrobe and forces her to work with him.’ A ‘source’ tells Star, “Ryan was very loving and sweet to Blake before they married. But not long after they said their vows, his demeanor started to change. He is reminding his bride of the toxic relationship between Tom Cruise and Katie Holmes. She’s concerned. She can’t keep living like this.”

Sure, Star. Because Blake Lively and Katie Holmes were such close friends, Blake knows all about her ‘toxic’ relationship to her ex-husband. Also, there’s simply no way Blake would let anyone touch her fashion choices.

I’m sorry, I usually love Blake gossip. It’s just looking more and more desperate on the tabloids’ part if they can’t come up with something even semi-believable. This story reeks of BS, and while I have no doubt that Blake is staying at  home and being a good little wifey when Ryan works, there’s no way she would put up with a controlling husband. This is the girl who managed to date and dump Leonardo DiCaprio within a couple of months, after all. Don’t underestimate her.

And while her acting talent may be lacking, I have no doubt that she’s planning some sort of career comeback. After she has babies, of course.