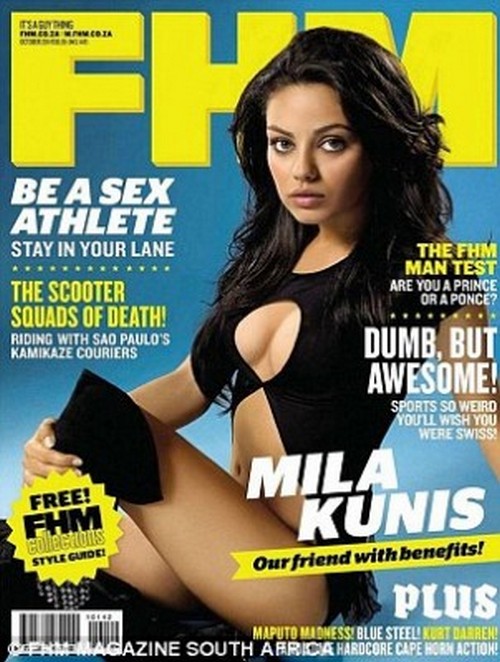 Mila Kunis has been turning heads in her hit movies for some time, and now she has been named the Sexiest Woman in the World by FHM Magazine. The “Oz: The Great and Powerful” star’s takes the top spot on the list, which was announced on Wednesday (May 1) and ends a four-year run by British winners.

Mila Kunis rose to fame on the show That 70’s Show. Since then Mila, a Jewish Ukrainian born actress, has been in several movies including Teddy. Mila Kunis is dating fellow Hollywood celeb Ashton Kutcher. Ashton has gone from the alleged substance abuser, Demi Moore, to the SEXIEST WOMAN ALIVE (Mila Kinis) now can anybody say “WINNING”.

Mila Kunis appears to be a younger sexier version of Demi. Has Ashton finally noticed the age difference and just went out and replaced the older model with a new younger playmate. The actor, who is still married to Demi Moore, toldElle why he won’t open up about his new love.

“You know, I’ve learned the hard way how valuable privacy is,” he tells Elle. “And I’ve learned that there are a lot of things in your life that really benefit from being private. And relationships are one of them. And I am going to do everything in my power to have this relationship be private.“

Do you agree that Mila is the sexiest woman in the world? Share your comments.