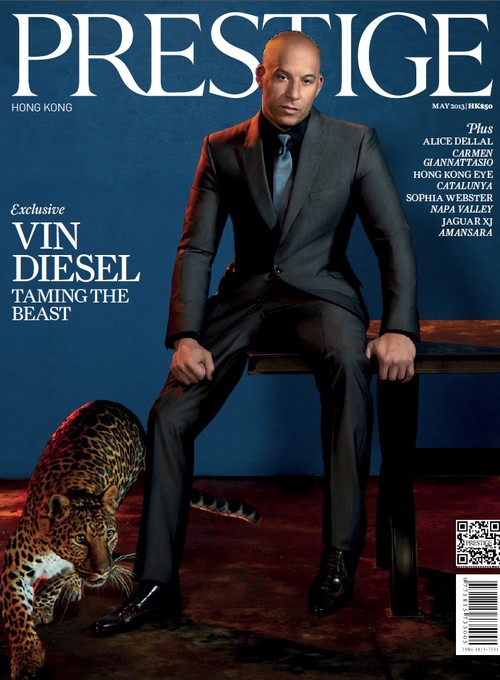 For a guy best known for his starring role in the street-racing, action-exploitation film franchise The Fast and The Furious, Vin Diesel commands surprising respect. Prestige Hong Kong’s cover star for the May issue unveils another side so at odds with his tough guy on screen image as he talks about being a family man, a raconteur and even an eclectic artist. The former break-dancer and bouncer now has a string of successful roles behind him and heads a number of film production companies. And with Fast & Furious 6 set to open shortly, the muscle-bound native New Yorker was only too happy to pose for an exclusive photoshoot with Prestige Hong Kong.

Check out a few  highlights of the interview in the magazine below:

On the level of his physical involvement in the Fast movies:
“To the point where there are days I come home, drop to my knees, kiss my kids and can’t believe I made it home.”

On Writing:
“I’m a writer. But I guess don’t exercise my writing ability in the traditional way. It’s miraculous how much a writing interest or experience in the writing world helps you as an actor with this sea of unfinished scripts that we’re supposed to turn into movies.”

On Directing:
“I started directing as a shortcut to get in front of the camera, as I clearly was not getting the [movie] roles”

On Broadway:
“I remember singing old Broadway tunes to my grandmother who just loved Clark Gable movies and musicals. I remember performing for everyone. I was the class clown in grade school. But I loved to dance. I was a break-dancer, real New York City break-dancer.”

On family and fatherhood:
I don’t think there’s a parent on the planet that doesn’t wake up and think, “How can I be a better parent?”